Call of Duty: Modern Warfare’s Gunfight is the kind of game mode I didn’t know I wanted until I sat down and played it. The rules are simple: two teams with two players each attempt to wipe each other out to win a round, first team to claim six rounds wins the match. If nobody is killed within 40 seconds a neutral flag spawns, forcing both teams into the centre of the map.

There are no killstreaks and no create-a-class options at your disposal, instead everyone spawns with the same randomly generated loadout, and the loadout changes every round. Quickscoping wunderkinds will rejoice when they spawn with a Dragunov in their hands, but the tables may turn when they end up with a shotgun and a rocket launcher in the next round.

The three Gunfight maps I play all appear to be purpose-built, shrunk down adherents to Call of Duty’s three-lane structure. King is set inside a warehouse training facility and calls to mind COD 4’s Killhouse map, Pine is takes root in a dense forest, while Stack is sets up shop in a shipping container yard in the middle of a desert.

The difference between each map is in how they deal with high ground. In Pine, for example, the flanking lanes are both raised, offering great views of the map, but deciding whether to split your team down both sides or double-up to gain an advantage on one lane is where things get tricky. King offers the opposite conundrum, with a raised platform acting as the middle lane and a staircase from each spawn leading up to it. You can either hope to secure the high ground by racing to the centre, wait in spawn to catch the onrushing duo off guard, or flank around and sneak in behind them. Mind games start factoring in after a few rounds have passed and by the end of the match you’re feinting movements out of spawn or unloading through plywood walls to try and eke out any kind of advantage.

The tiny maps and two-player teams ensure that you’re always a couple of seconds away from victory or defeat, and if you lose your buddy early into a round the odds are never as severely stacked against you as they are in a 5v5 game like Rainbow Six Siege. You can clutch your way out of any scenario, and the confluence of cramped maps and oddball weapon loadouts ensures Gunfight is continually producing ‘play of the game’ moments. Matches are fiercely competitive, but restrictions on loadouts and killstreaks mean it’s always a fair contest. 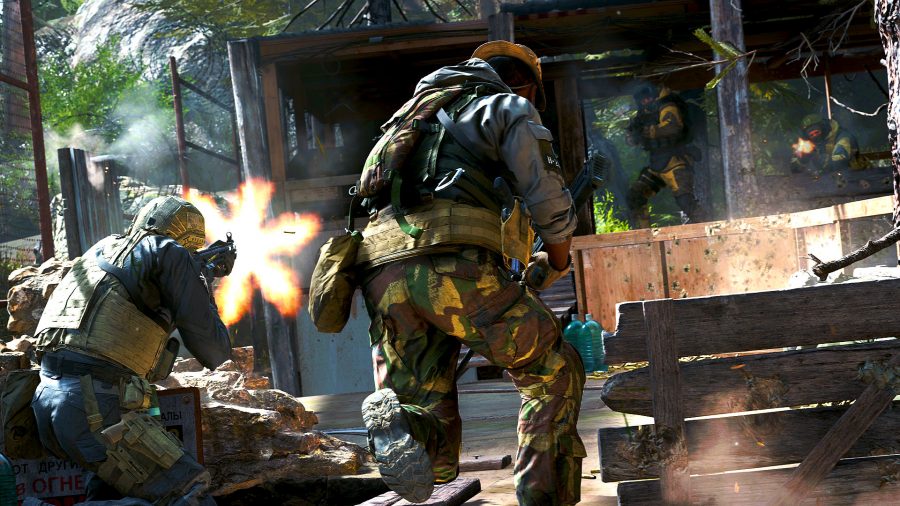 Gunfight also works because it accentuates one of Call of Duty: Modern Warfare’s best features, its revamped guns. As ever, Modern Warfare’s gunplay feels precise, responsive, and smooth, but Infinity Ward is raising the bar when it comes to satisfying gunfeel, improving the audio feedback and fidelity to put it on par with the Battlefield series. The veteran studio has also added a slew of visual tweaks – including subtle motion blur around the barrel when firing – more realistic muzzle flash, and smoking ejector ports. New reload animations overhaul some of the laughably casual reloads of previous COD games with a greater sense of urgency. Likewise, the ability to lean around corners or reload while aiming down sights provides some extra immersion without slowing down the action.

Weapon types feel distinct, too, and after so many near-future, sci-fi, and WW2 shooters in recent years it’s refreshing to get my hands on modern classics like the PKM, P90, M4A1, and Dragunov.

As a first taste of Call of Duty: Modern Warfare’s multiplayer offerings, Gunfight certainly doesn’t disappoint. It’s the perfect middle ground between casual and competitive play, encouraging teamwork and skill over adhering to a strict meta or racing to unlock killstreaks. The rapid pace of each round and the small, simple map design ensure it’s easy to digest in small bites. The full Call of Duty: Modern Warfare multiplayer gameplay reveal arrives on August 1, 2019, so we’ll have to wait until then to see what other modes and features Infinity Ward is cooking up, but Gunfight is a confident start indeed.