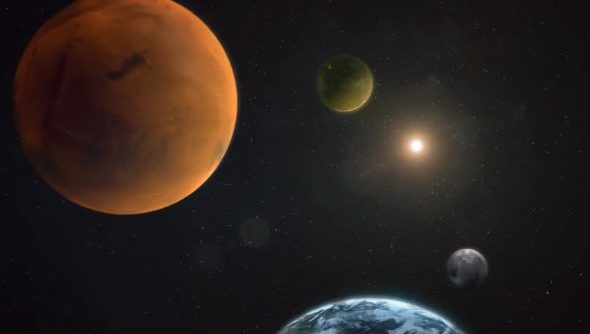 According to rumours from viable sources, this year’s Call of Duty will leave the sci-fi exo-suits and double jumps behind, taking us beyond our rocky prison and into the cosmos.

Imagine if Call of Duty got into our list of PC’s best space games.

That’s right, Call of Duty is going to space, if notorious industry source Shinobi is to be believed. Eurogamer say this tallies with reports they’ve independently heard.

Call of Duty has been pushing forward through time since the series began, starting in WWII, catching up to modern warfare and, more recently, moving into the battlegrounds of the future. This next one will apparently take place among the stars of the far future – so no Kevin Spacey, which is annoying because we’ll have to be much more creative with our jokes.

The game is being developed by Infinity Ward and won’t be a direct sequel to Call of Duty: Ghosts, the same studio’s dog-bothering man shooter. If the rumours turn out to be true – which seems highly likely – the shooter could be leaving Earth in November, as tradition dictates.

It does make you wonder where Call of Duty will go from here. Will it go back to its roots and give us another WWII shooter, or will it plough further on, slipping into a post-human war, as gaseous beings fight for dominance in the cold void? Let us know what you expect from the future of the series in the comments.