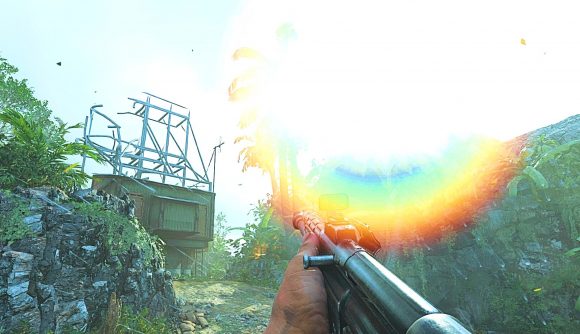 Activision Blizzard and Sledgehammer Games recently held a multiplayer beta for Call of Duty: Vanguard. Sounds pretty standard, right? Well, the developer has posted a list of issues it promises to fix ahead of release, and it involves “nerfing the sun”, “cracking down on Red Star Raves”, and “removing dognados”. Naturally, we had to investigate.

The first issue is pretty straightforward. Call of Duty: Vanguard had some pretty intense lens flare during the beta. There were oodles of complaints about the sun’s brightness during the beta and how off-putting it was. The sun wasn’t the only visual issue players found, though.

Deputy editor Jordan recently wrote about his time with the Vanguard beta, mentioning that visibility while he was sprinting around the map wasn’t too bad. You had some haze at mid-range, and that made spotting snipers a tad difficult. Things got a bit dicey, though, when you tried to pull the trigger. Jordan explained that the mixture of muzzle flash and smoke made tracking enemies quite difficult. We also found that the Call of Duty: Vanguard beta had significant server and audio issues.

The upcoming PC game’s Red Star map also had a heap of visual glitches. Players had a few graphical hiccups that made playing a game about war more akin to going to a rave – warning, the clip has flashing images:

Call of Duty: Vanguard’s ‘dognado’ glitch looks like a very poor way to treat a doggo. You can equip yourself with a Vanguard kill streak that gives you a pack of attack dogs for getting ten kills in the game. Sounds fair enough, but this is what some people we’re actually getting, and the image of it will stay for us for a long while yet:

So, yeah, that’s all getting fixed ahead of the Call of Duty: Vanguard release date, thankfully. Until then, though, we’ve got a heap of guides to help you out if you’re looking to do some reading to prepare for the big event. Here’s everything we know about Call of Duty Vanguard and Warzone Season 1, for example.

In September, an agency of the US federal government opened an investigation into Activision Blizzard’s response to sexual misconduct and discrimination complaints from its employees, as part of which Kotick has reportedly been subpoenaed. The company is also facing a separate unfair labour practice suit alleging “worker intimidation and union busting” filed by a workers’ union, also in September.