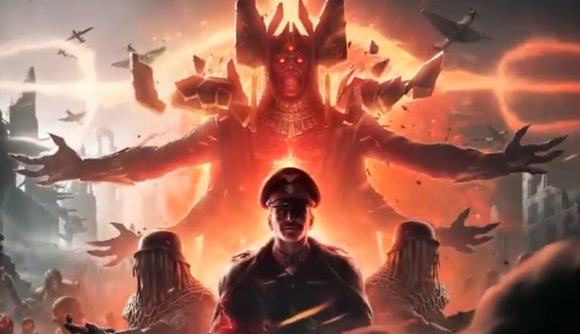 Call of Duty: Vanguard is just over the horizon, and when it arrives, it’ll be bringing a brand new zombies experience along with it. The multiplayer game’s popular (and increasingly weird) zombies mode will get a proper reveal this week, with a worldwide premiere scheduled for October 14.

Developer Treyarch and Sledgehammer Games have both tweeted teasers for the zombies reveal, and the animated gif they’ve included in one of the tweets indicates that there’s a new big bad in zombietown. It’s a towering undead figure dressed in some kind of ceremonial robes and headdress, who notably sports four arms rather than the two you typically find on your average zombie.

Apparently, Vanguard’s zombies mode involves demons, in addition to the Dark Aether dimension introduced in Call of Duty: Black Ops – Cold War’s zombies mode. It’s generally understood within the lore that Dark Aether is the literal Hell, so having demons showing up in the story doesn’t come as a huge surprise. How exactly all that is going to unfold remains unclear at this point, but we’ll be finding out more on Thursday.

Zombies + Dark Aether + Demons!? 🤘#Vanguard is bringing one of your favorite modes with a sinister twist.

… and here’s Treyarch with some “it’s alive!” jokes.

Raise your hand if you're ready for the worldwide reveal of #Vanguard Zombies.

All of this is bound to eventually bleed over into Call of Duty’s battle royale mode, so here’s everything we know so far about Call of Duty: Vanguard and Call of Duty: Warzone’s upcoming reset to a new season one.