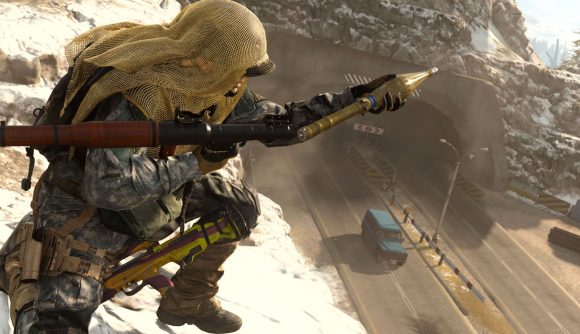 Before its launch earlier this year, Call of Duty: Warzone developer Infinity Ward explained it had been testing 200-player-strong matches in the game, and that it would “release that a little bit later” – that is, sometime following the battle royale game’s release. Now, it looks like 200-player match support could be on the way, and potentially soon, based on an in-game message that appears to reveal the option for two of Warzone’s game modes.

Twitter user DissolvexD (via VG24/7) has posted a screenshot of what seems to be an introductory in-game message that popped up for Warzone players this past weekend. Announcing some of Modern Warfare’s multiplayer maps were free to play for a limited time, the message seemingly included a shot of the FPS game’s menu in the background – and instead of showing the current modes available, included options like “BR 200” and “Plunder 200”.

This is alongside the “BR Juggernaut” mode, which has been confirmed as on the way to the game in the latest Season 4 roadmap.

It’s worth noting the screenshot far from confirms 200-player support is headed to the game soon, but given the dev has previously indicated it will be releasing it at some point in the free PC game’s future, it’s looking at least possible it’s in the pipeline for launch in some form, possibly even during Season 4.

Warzone currently supports up to 150 players in a given match, so the option for up to 200 would be a pretty big leap, and add some new dynamics into the mix. Guess we’ll have to wait and see to find out if it’s on the way soon.