Our Warzone Bizon loadout aims to make one of the most off-meta weapons in the game feel competitive. Most close range weapons thrive on Rebirth Island, and the PP19 Bizon is no exception to this. While the Bizon is rarely seen in custom loadouts in Warzone, it has appeared as floor loot, unfortunately never in good forms. However, with the right attachments and the best Warzone loadout backing it up, the PP19 Bizon can perform really well in the right hands.

The PP19 Bizon boasts plenty of unique benefits you can’t match with the more popular Warzone MP5 loadout. For example, its maximum damage range with the right spec is almost 50% better than that of the MP5, its magazine capacity can be upped to a ridiculous 84, and its headshot damage is higher to boot. To cap it all off, the iron sights offer great vision and the recoil is very easy to manage.

You’ll need to treat it very differently to the MP5 to really get the best out of this Warzone Bizon loadout, but if you’ve been looking for a different SMG in Warzone then this is a lot of fun and surprisingly effective.

The Bizon’s best attributes are its massive magazines and its high max damage range, so we’ve simply built into those so you have an SMG that can deal max damage at nearly 20m away. This gives you the flexibility to use the Bizon as a primary weapon on Rebirth Island, or as a powerful secondary option on Verdansk. The mags give you 84 rounds to play with between reloads, which lets you maintain pressure for a lot longer during a fight or take on multiple players at once. 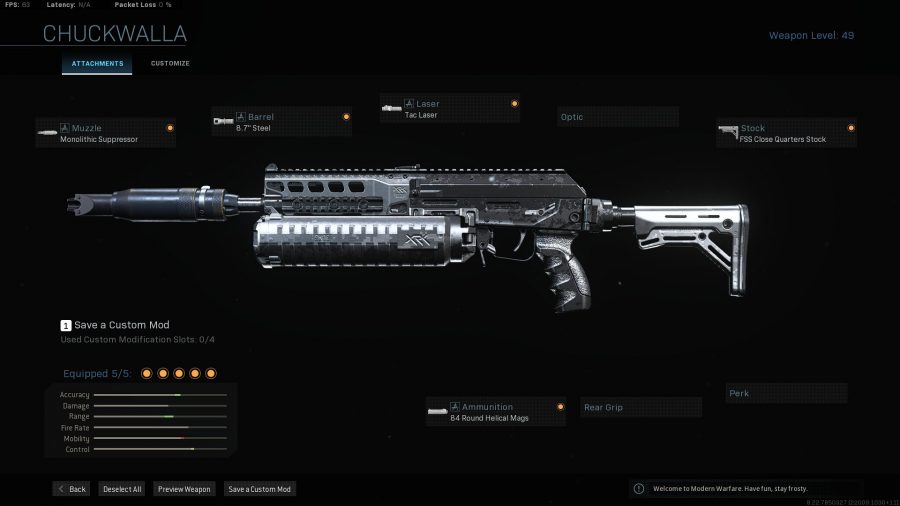 With that extended range and the Bizon’s impressive headshot damage you’ll want a low recoil build, so we’ve opted for the FSS Close Quarters Stock and Tac Laser to shave a little time off the aim down sight speed without ruining the weapon’s low recoil. The damage range of the Bizon means you should use it in close-quarters, but never extreme close quarters as it will lose against the MP5 at this range.

So, how do you compliment the Bizon? Your second primary weapon in this Bizon loadout should be something that can handle long range fights. That means you’ll want the best sniper rifle in Warzone, which for our money is the Kar98k. On Rebirth Island, you should bring one of the best assault rifles in Warzone – our personal favourite is the deadly Cold War AK47.

And that’s all you need to build the best Bizon loadout in Warzone. Call of Duty Vanguard and Warzone Season 1 is launching soon – check out our guide to find out what’s coming to the game in December. You can also learn more about the new Warzone map and how it’s going to change Warzone for the foreseeable future.