Looking for the best Warzone PKM loadout because you can’t be bothered to grind out the best MK9 Bruen setup in Warzone? We don’t blame you. The PKM is one of the only good LMGs in Warzone thanks to its high damage per shot, predictable recoil, and performance over long ranges – not to mention its potential 200-round magazine upgrade. If you can get over the lengthy aim down sight speeds, hefty reload times, and slow movement speed then you’ll find one of the most powerful Warzone guns around.

Despite the Bruen becoming the default meta weapon in Warzone right now, the PKM actually beats it in a number of key areas, including aim down sight speed, recoil, and damage per second. Our Warzone PKM loadout shaves a little time off aiming down sights, maintains the exceptional damage over long distances, and makes reloads a little less terrifying by pairing it with a solid backup weapon.

Sure, the Bruen wins when it comes to versatility, but if you can catch a squad out in the open with the PKM then you can pour bullets into them without pausing for several seconds.

The best Warzone PKM loadout is:

The aim with this PKM build is to make the PKM as easy to control and use over long distances as possible so almost all of the attachments that we’ve chosen lean into this. The Heavy Barrel and Monolithic Suppressor offer the maximum damage range and best possible bullet velocity, making it suspiciously easy to beam enemies at long range. The VLK 3.0x Optic is the easiest mid-range optic to see through and produces almost no visual noise when firing, so keeping the crosshair on your target should be easy. The Snatch Grip will make you aim down sight speed a little faster while also offering a little extra recoil control. Finally, we’ve opted for Sleight of Hand so those lengthy reloads are just a bit easier to pull off in the middle of a fight than before. 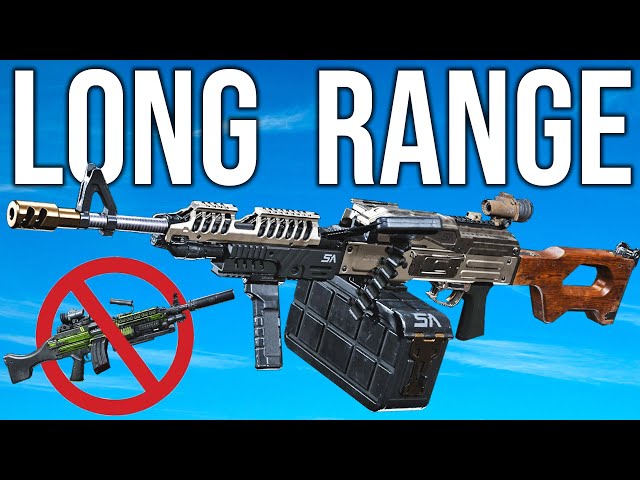 YouTuber Stodeh argues that the Tac Laser should be your fifth attachment as it improves the aim down sight speed significantly. However, we find that as the PKM is best deployed when firing around cover that extra boost to your ADS isn’t all that valuable. Either way, his videos on the weapon will certainly whet your appetite for trying out fresh weapons, so take a look above.

More Warzone help: Our picks for the best Warzone loadout

As for the rest of the loadout, take EOD, Overkill, and Amped as your perks, and C4 and Heartbeat Sensor as your equipment picks. Overall, this gives you protection against explosives, explosives to lob into buildings, extra intel, and the ability to quickly switch to your second primary weapon in a hurry.

As for that second primary weapon, it really is up to you. However, as your PKM is going to take several seconds to reload, we would suggest taking something mobile with either rapid reloads or plenty of rounds in the mag. We pair the PKM with our best Warzone MP7 loadout as it carries 60 rounds in a mag, is extremely nimble, and reloads quickly.