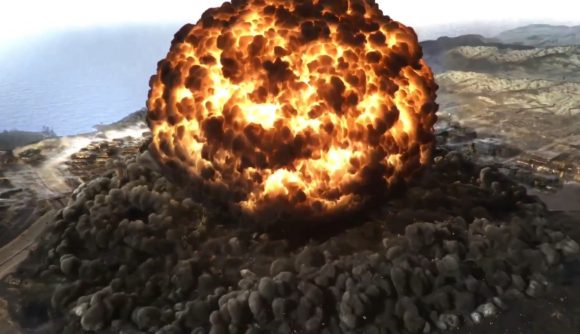 Well, they did it. The mad lads went and blew up Verdansk. The start of Call of Duty: Warzone Season 3, and the launch of a new battle royale game map, is underway, and it’s gotten off with a bang. Two bangs, when it comes down to it: the nuclear warhead that detonated at the stadium, and the server issues that hit at the same time, keeping players from logging in to see the event ‘in person.’

You can watch the in-game cinematic below. The warhead silo opens and a missile emerges on a thunderous column of billowing exhaust. The guided weapon reaches Verdansk and lowers its altitude to follow a street, bound straight for the church that stands near the stadium that dominates the landscape. A flash, and we pull back to take in the mushroom cloud, a shockwave rippling out from the blast site and obliterating everything in its wake.

Unfortunately, that’s the extent of what many players have gotten to see so far. Players are reporting being stuck in server queues, sometimes waiting more than an hour for a chance to log in to Warzone.

🚨 VERDANSK HAS BEEN NUKED! ☢️ pic.twitter.com/eteoZ1GEMR

A playlist update has been released that should help reduce the frequency of crashes.

Stand by for more updates.https://t.co/A4SmRKaZRZ

Something is causing the Warzone servers to crash for The Destruction of Verdansk Part 1, it seems. The studio has applied a playlist update that it hopes will improve matters, but we’ll have to wait and see how it shakes out. Raven will be providing updates over Twitter and the Trello board linked in the tweet above.