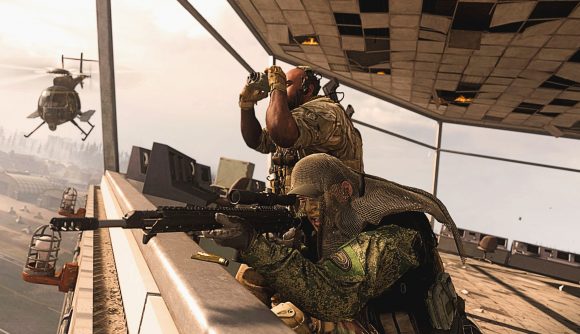 With solo, trio, and quad squad configurations available, it was getting a little weird that Call of Duty: Warzone didn’t allow teams of two into Verdansk. But as has been strongly hinted in datamines, duos mode has been planned for some time, and now it’s finally arrived.

The mode does exactly what it says on the box – there’s now a mode for teams of two players in Warzone, which potentially makes organising a co-op night a bit easier than if you needed three or four total players. Duos mode maintains all the rules of normal Warzone: there’s still the trip to the gulag to deal with if a team member bleeds out before someone can revive them, and the last duo with a surviving member wins the match.

But as Activision points out in the Mode Recon blog post announcing the arrival of duos, the two-player mode does demand some shifts in how you approach a match, particularly from the squad role assignments perspective. “Assault rifle-sniper builds are great, but if neither of you has an answer for vehicles or a close-range battle with a shotgun, you may be in trouble,” the post says.

That’s certainly true, as is the advice to avoid getting dragged to the gulag at all costs. It’s not that the gulag itself is more dangerous in duos, but rather that the survival prospects of your teammate in 2v1 situations is on average fairly terrible.

Activision also encourages duos players to focus on communication by making a redoubled effort to call out loot locations, enemies, and objectives. The post also recommends bringing along the Overkill perk, which lets you bring two primary weapons down in a loadout drop.

“Winning a Duos match requires a bit more individual skill from each squad member than a Trios or Quads game,” Activision advises. “Practice your gunskill in Solos or in Modern Warfare multiplayer, and if your Duo isn’t pulling weight, you may have to sub them out… Just remember, it’s nothing personal.”