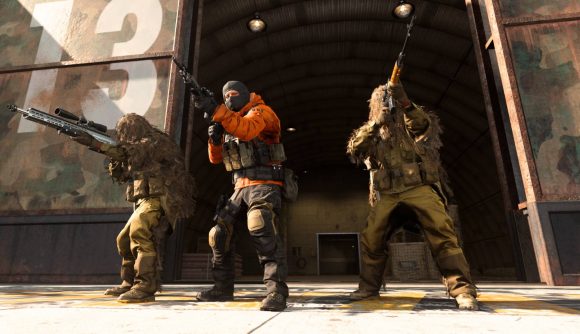 Players are currently racing around Call of Duty: Warzone‘s Verdansk map, searching for a new batch of codes and the doors they open up. They’re hoping to reveal… well, something that will probably be related to this year’s as-yet-unannounced mainline Call of Duty game.

All of this began earlier this month when Call of Duty influencers received mysterious wooden crates in the mail that contained vintage projectors, along with a set of slides. These slide sets each contained different images, and all the projector recipients had to combine the information found on them in order to eventually work out a coded reference to a famous Cold War-era chess match between Russian player Boris Spassky and American Bobby Fischer. This ultimately pointed to PawnTakesPawn.com, a website counting down to 12:00 EDT today, August 14.

When the countdown reached zero, Warzone players discovered a new code displayed on the VCR shown on PawnTakesPawn.com. It reads WZ-H6-49285 163. ‘WZ’ is a fairly obvious reference to Warzone, and H6 on the Verdansk map corresponds to the Farmland location.

The code, it turns out, opens a door in the farmhouse, as shown here by CharlieINTEL:

The Code on the VCR opens a door in Farmhouse (via @PrestigeIsKey) pic.twitter.com/j7Y2HP1tEl

Inside, players have discovered a treasure trove of documents. Some contain references to ‘VENONA,’ which it seems is probably a reference to the Venona Project, a US counterintelligence program that began during World War II and was meant to intercept and decrypt messages from the Soviet Union. In other words, super secret Cold War stuff.

The documents are clearly part of a puzzle, but players still haven’t figured out exactly what they mean. However, more Call of Duty: Warzone bunkers now have activated keypads, so it’s likely a matter of the CoD community brute-forcing codes into keypads until someone gets it right.

Ultimately, all of this seems like a creative approach to revealing the next Call of Duty game, although we’ve already gotten pretty good confirmation – thanks to a leak by Doritos, of all people – that it’s a Black Ops game set during the Cold War.

Activision told investors during its quarterly earnings call early this month that Warzone was a “great platform” for sharing news about Call of Duty, and this treasure hunt is proving to be a hit with players. We’ll know more when they crack the code.