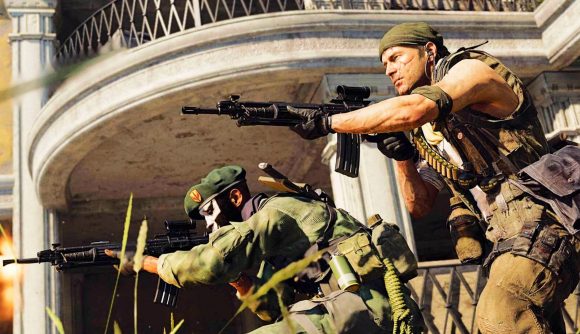 Two of Call of Duty: Warzone‘s most popular weapons have been slapped with nerfs in a new patch. Raven Software posted a new set of update notes, alongside some rationale behind its thinking on the FFAR 1 and AUG tweaks.

The AUG – better known as the Cold War Tactical Rifle Charlie among the game’s elite scholars – has had its recoil strength increased. Raven explains this change intends to maintain the weapon’s identity as a powerhouse that’s difficult to wield. “Right now, we feel it is too easy to stay on target given how lethal it is,” the studio says. “We will continue to monitor the performance of the Tactical Rifle Charlie and make additional changes if necessary.”

Next up is the FFAR 1, which appears on the war game’s subreddit as frequently as a stim glitch. This one has had its ADS speed slowed down to make it more like an assault rifle and less like an SMG. “The FFAR’s wholesale efficacy has it edging out SMGs at ranges we’re not satisfied with,” Raven explains. “Ideally, the FFAR fulfils the role of a mid-range dominator while falling prey to weapons that excel in short-range engagements. We are bringing the FFAR a bit more in line with what you might expect from an AR – damage and range at the cost of handling.”

The changes seem pretty neato, but we don’t have any hard numbers, so we don’t know how significant these changes are. As ever, I’m sure the Call of Duty community will dig into it.

Elsewhere, camo challenges for the R1 Shadowhunter should be working as they should, and attachments have seen many bug fixes. You can catch the full patch notes below:

Here's a screenshot for those who are having trouble seeing the April 6th update on the patch notes page. pic.twitter.com/E8ilvqkpHv

If you’re looking to test these guns with the best Warzone FFAR 1 and AUG loadouts, you know where to click.