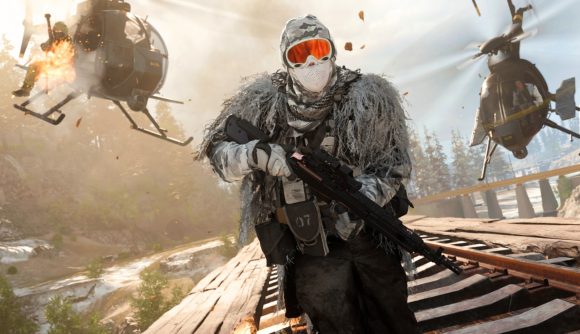 December 18, 2020 Raven Software has disabled the attack helicopter while it works on a fix for the invisible glitch. Original story follows.

Welp, a new invisibility glitch is wreaking havoc in Call of Duty: Warzone. Players started flooding to Reddit yesterday to share that invisible foes are taking them out, and that there was little they could do to defend themselves.

The glitch proves troublesome as people who use the invisibility glitch can still damage you. They also don’t make any sound, so they can sneak up on you and assassinate you with relative ease. Players are also reporting that dealing damage to them proves quite tricky. I’ve seen some Warzone players say that shooting them doesn’t work, but a few others have managed to bring them down by blowing up a vehicle they were in (below).

Pulling off the invisible glitch doesn’t seem too tricky, either, as it merely involves crashing while using the battle royale game’s new helicopter minigun. I won’t go further into it than that, but several players have pointed out that it’s relatively easy to do.

In the meantime, though, you can, at least, enjoy one clip of a Warzone player overcoming an invisible foe by blowing up their buggy:

To clarify, this change is to combat the bug causing players to appear invisible to others.

In the meantime, though, if you’re looking to kit yourself out with the best gear, then our best Warzone loadout guide will serve you well. If it’s the best Warzone guns you want, then you know where to click.