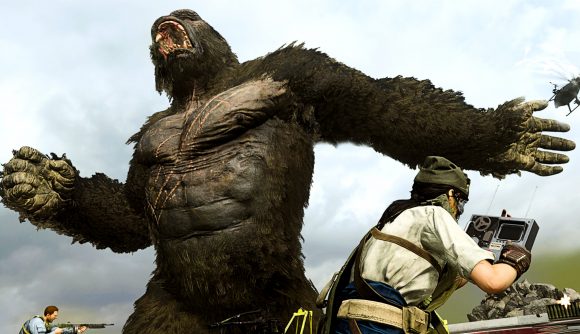 Players are already having fun monkeying around in Call of Duty: Warzone’s new Operation Monarch event, with Godzilla and King Kong helping some players to victory in the FPS game. The Operation Monarch event is now underway and sees the two battling behemoths roaming Warzone’s Caldera island map, causing chaos as teams duke it out for survival in this limited-time mode.

As well as creating hazards around the map, Godzilla and Kong’s devastating power can also be employed by players who earn themselves a S.C.R.E.A.M. device by being the squad to deal the most damage to one of the monsters during a designated Titan Frenzy period. The device can then be used to direct an attack from the lumbering leviathans – Kong leaping in to deal huge damage and Godzilla blasting zones with his heat ray.

Both Twitter and the Warzone subreddit are already awash with clips of the beasts coming in clutch and helping players to secure victory. Reddit user 08Alpha12’s team deployed the S.C.R.E.A.M. device to call in Kong to clutch a dramatic victory from a 1v3 position. Another player, MrTX, was downed not long after calling in the gargantuan gorilla only to have Kong leap in to secure the victory as they lay on the floor. The big lizard has been putting in work, too – Unable-Cause3910 took advantage of Godzilla’s devastating beam attack to help close out their own victory.

Some players, however, have found themselves on the wrong end of the beasts’ wrath, with Reddit user nungoopungoo falling victim to a sudden leap from Kong as they were parachuting in from the initial jump. Drdewd0 on Twitter was a little more fortunate, benefiting from a nasty rock throw from Kong that downed multiple players as they attempted to secure a rooftop vantage point. MrDalekJD, on the other hand, found out that Kong’s size doesn’t always mean he’s easy to spot coming, while thephantomcannon proves that even seeing it might not be enough.

Kong wins us a 3v1! from CODWarzone

The Call of Duty: Warzone Operation Monarch event dates are May 11 – 25, so there’s plenty of time for you to see Godzilla and King Kong in action for yourself. If you do, we’ve got you covered on the best Warzone season 3 guns and the best Warzone Pacific loadout to ensure you get the perfect drop onto Caldera.