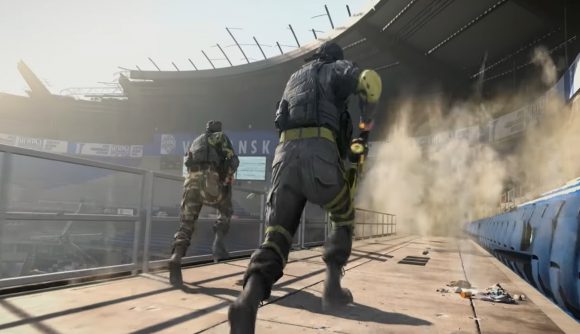 Players in Call of Duty: Warzone have been receiving some ominous in-game messages. Strange text has been appearing on-screen in the battle royale, likely teasing the next Call of Duty game.

Reports started coming from Reddit (ta, Eurogamer) over the last couple of days of players’ screens being temporarily hijacked by some glitchy messaging. The first line reads “know your history”, and the second is Russian that more or less means “doomed to repeat it”. The message arrives without warning, and seemingly at random points during matches in the multiplayer game, so be wary. Thankfully, it doesn’t last long, so shouldn’t interfere too much with any crucial moments.

This is likely part of a marketing push within Warzone for 2020’s upcoming Call of Duty game. For the last several months, players have been solving puzzles like Bunker 11, and the current stadium key cards, which keep leading back to clues involving some as-yet-unnamed Russians. The Warzone map appears to be changing right before our eyes as we get closer to Cold War.

Activision hasn’t formally announced the next Call of Duty yet, but the publisher has revealed it’s a co-development by Treyarch and Raven Software. The title, Call of Duty: Black Ops Cold War, was leaked by Doritos.

You can see footage of the message below:

Call of Duty: Warzone has reached over 75 million players. We have guides on the best ISO loadout, and best AN-94 loadout, to keep you one step ahead of the opposition.