Black Ops Cold War fully integrated with the battle royale game at the beginning of Season 3 with the release of ‘80s Verdansk, five months after its November launch. There were a number of issues with the Cold War integration that took a while to fix: popular weapons were completely unbalanced for months, attachments didn’t function like they were supposed to, and weapon balancing on Modern Warfare weapons completely stopped.

A recent Call of Duty blog post broke down everything coming to Warzone less than a month after Vanguard launches. There are plenty of in-game events on the run up to Warzone Pacific, so stay tuned for more information. Here’s everything we know about the new Warzone map so far.

Caldera is set to launch on December 8 at at 9am PT / 12pm ET / 5pm GMT for Call of Duty Vanguard players. If you don’t own Vanguard, you have to wait until December 9 to play on the new map, however, you do have access to Rebirth Island during this exclusivity period. 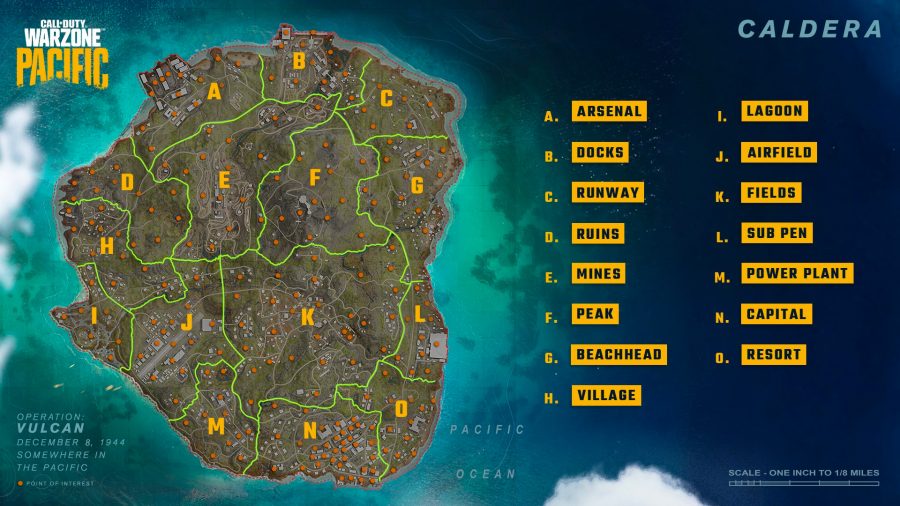 The Caldera map, complete with every point of interest has been revealed by the official Call of Duty Twitter account. There appears to be over 200 different points of interest on Caldera. The text on the map says: “Operation: VULCAN. December 8, 1944. Somewhere in the Pacific.”

Here’s every zone on the Caldera map:

WARZONE Secrets of the Pacific EVENT

The Secrets of the Pacific event is currently live in Call of Duty Vanguard and Warzone. This event comes with six challenges in both games – read our Call of Duty Vanguard and Warzone – Secrets of the Pacific locations guide to complete all 12 challenges. Check out this post on Reddit which reveals all 12 of the Caldera map previews. 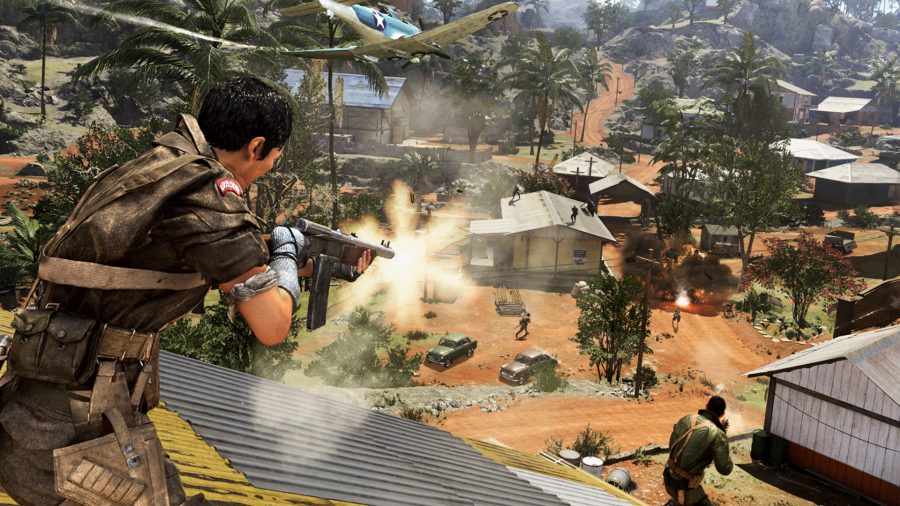 Warzone Pacific launches with a Vanguard playlist which restricts the weaponry to the Call of Duty Vanguard guns only. The idea behind this playlist is to ensure the game balance can be tweaked without having to alter the stats of over 100 different weapons. For the first time in Warzone, players can take to the skies with machine fighter aircrafts and participate in aerial battles.

The current batch of Vanguard weapons struggles to take down aircrafts, however, there are new vehicles in Warzone Pacific like the anti-air truck which make it easy to defend against planes. Aircrafts won’t be available in any other playlist, so you can rest easy knowing a soldier with a Stinger lock-on launcher isn’t going to instantly take you out.

To combat the hackers in Warzone, the developers have announced plans to introduce the Ricochet anti-cheat initiative. Ricochet is a kernel-level driver affecting PC players only – this should help cut down the number of cheaters that currently plague Warzone. The kernel-level driver won’t be released at launch worldwide, instead the devs are deploying this driver on the Asia-Pacific region first. 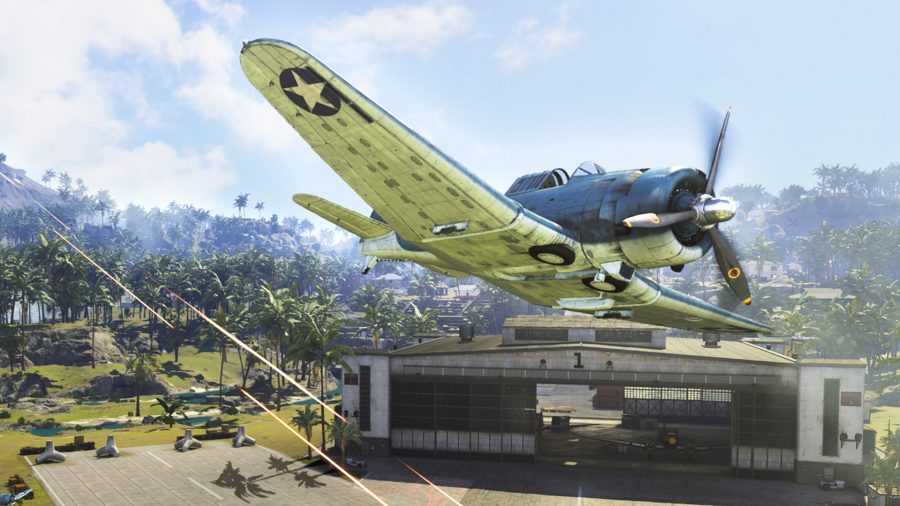 Everything you earned throughout the past two years carries over to Warzone Pacific, including weapons, calling cards, and operators. We’ve highlighted the Vanguard playlists which only let you use Vanguard weapons, but there are other playlists that let you use your levelled up weapons from Modern Warfare and Cold War on Caldera.

Remember, all of your non-weapon unlocks can be used in the Vanguard-specific playlists. You can continue to play as Adler or Captain Price and ride around in your pink anime truck – every vehicle skin you’ve unlocked works on Caldera regardless of whether or not it fits with the aesthetic.

Rebirth Island is returning to Warzone Pacific, giving players a smaller map to enjoy alongside Caldera. The mini battle royale map is going to have two playlists at launch: Resurgence and Mini Royales. Expect to see more Rebirth Island playlists as additional seasons are added to the game. 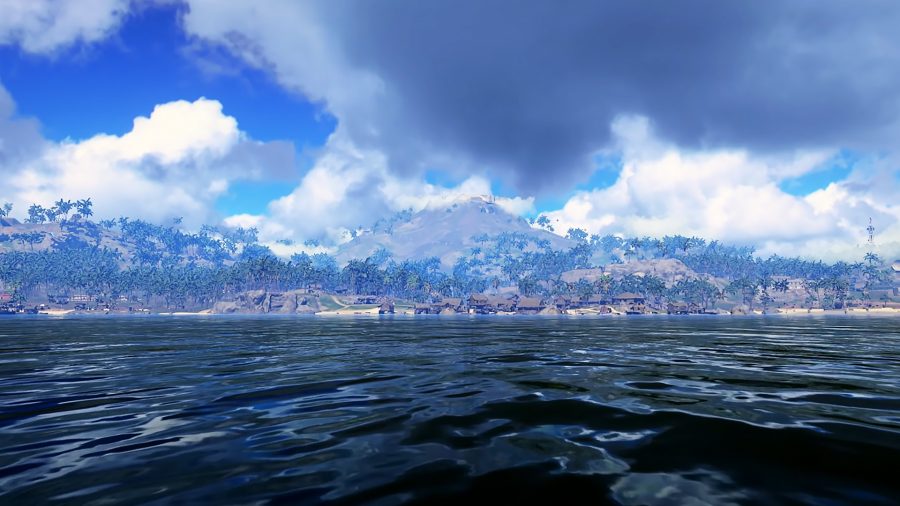 The new Warzone map is based within the Pacific, introducing vibrant landscapes and lush environments to the battle royale game. Raven Software has partnered with Sledgehammer Games, Toys for Bob, High Moon Studios, and Beenox to create a brand new map based on the feedback from the community. The Pacific map is said to be roughly the same size as Verdansk and is going to receive numerous content updates throughout 2022.

Snipers have been a long-standing issue in Warzone’s solo mode as players are incentivised to stay in the same location, fighting off anyone that appears in the distance. One detail we can make out from the image of the new map are the clouds surrounding the mountain. This was most likely implemented to prevent snipers from being able to pick players off from across the map.

Verdansk’s war-torn environment felt like the perfect place for Warzone, but after almost two years of the same points of interest, the developers want to spruce things up. While there was a slight refresh to the map with ‘80s Verdansk, fans were severely disappointed as they wanted a radical change. 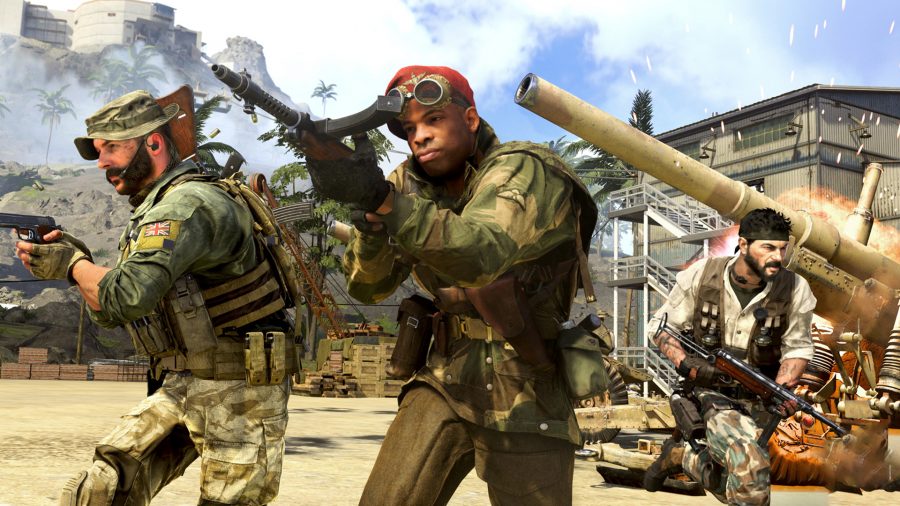 The first teaser for Call of Duty: Vanguard was the Battle of Verdansk which saw players working together to destroy an armoured train. After the train was destroyed, players were able to walk around the map as hundreds of planes flew across the sky. The planes dropped bombs onto Verdansk, killing everyone on the map. A teaser trailer for Vanguard appeared afterwards, showing off the four playable characters in the campaign.

Treyarch opted to use a modified version of the Black Ops III engine for Cold War, resulting in marginally worse visuals compared to Modern Warfare. Warzone Pacific uses the same engine as Vanguard, which should mean the integration period should be smoother this time around.

WILL ‘80s VERDANSK EVER RETURN?

It’s unlikely that players will ever be able to return to ‘80s Verdansk as they have been unable to return to modern Verdansk. Though Warzone does support the ability to play on ‘80s Verdansk and the smaller Rebirth Island, the devs have never given players the ability to go back to different versions of the map. Judging by the upcoming events in Warzone, it looks like Verdansk is going to be replaced for good.

The best weapons: Here are the best guns in Warzone

And that’s all there is to know about the latest map coming to Warzone. Savour your time on ‘80s Verdansk as this map is set to rotate out once Call of Duty Vanguard and Warzone Season 1 launches in December. In the meantime, crush your enemies by picking the best Warzone loadouts to ensure you’re ready to fight off rival squads.