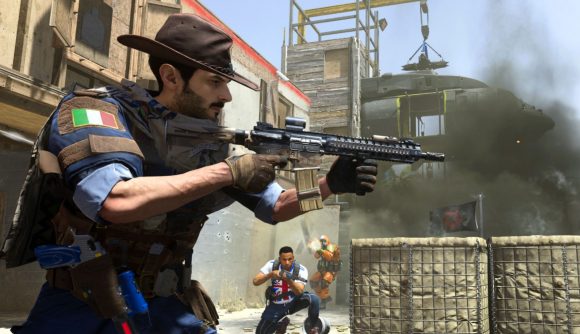 Season 5 will include a timed event called the Games of Summer, which is a series of trials that you’ll be able to play for both Warzone and Modern Warfare players starting August 28 at 10:00 PDT / 15:00 EDT / 20:00 BST. Infinity Ward says the trials are “easy-to-play, hard-to-master, single-player Trials of skill”, and that you’ll be able to earn medals by competing in them to represent your home country.

There are five trials planned, one for each day from August 28 to September 1, and each one involves using a different specific loadout to complete obstacle courses and target shooting challenges as quickly as possible. Earning medals comes with prizes that include vehicle skins, XP tokens, legendary weapon blueprints, and lots more. You’ll even earn bonus prizes for achieving a gold medal on your first try, and if you can win golds in every event, you’ll earn the legendary assault rifle Juliet blueprint. Everyone who participates will get a Games of Summer Cup weapon charm.

There’s lots more involved with the Season 5 Reloaded kickoff. With the launch, Warzone is adding the FiNN LMG, which Infinity Ward says is an ultra-light, open-bolt LMG that can “punch well above its weight” in its weapon class. There’s a new in-game challenge to complete to unlock it, and you’ll be able to get a blueprint variant in the ‘Mainframe’ bundle. It may in fact be a nice replacement for the recently-nerfed Bruen.

🥇 The Games will begin.
👑 Kings will be crowned.
🤠 Morte will join the fight.

Free-to-play Warzone players can participate in the new Gunfight Tournament, staged on the pitch level of the newly opened Stadium. Everyone will be able to take part in this tournament, which runs August 28-September 2.

For Modern Warfare owners, a new operator is inbound: Morte, an operator inspired by spaghetti Westerns of old, will be arriving later in Season 5 as part of his own store bundle. Sergio ‘Morte’ Sulla is Italian and a new recruit to Warcom. Additionally, the new mode Ground War Reinforce will be available during Season 5. As in Domination, in Reinforce the goal is to capture and hold three flags placed near the middle of the map. But if you’re downed in Reinforce, you’ll only be able to respawn when your team captures a new flag.

More information is available in the Infinity Ward developers’ blog, but all you need to know now is how much hard drive space you need to clear out if you’ve suddenly been inspired to reinstall Modern Warfare.