Wondering how to unlock the Streetsweeper shotgun in Warzone? This shotgun has been available since the latest season of Warzone launched in December, but the challenge required to unlock this weapon has been inconsistent for most players. Infinity Ward has recently fixed this challenge, finally giving you the chance to try out the brand new shotgun. If you’re looking to rack up kills in Warzone, the Streetsweeper and best DMR 14 loadout will give you the tools needed to dominate the game.

We’ve also assembled the best Streetsweeper loadout so you can head into the battle royale game equipped with everything you need. There are a few attachments that make this weapon extremely lethal, almost guaranteeing kills when used at close range. By increasing the damage range and fire rate of the Streetsweeper, you can transform this regular shotgun into one of the best close quarters weapons in the entire game.

Unlike the other Call of Duty Cold War guns, the Streetsweeper is fully automatic – making it the fastest shotgun from Cold War. Unlocking this weapon shouldn’t take you much time, but if you just can’t wait, there’s an easy way to skip the process entirely. Here’s everything you need to know about unlocking the Streetsweeper shotgun in Warzone.

HOW TO UNLOCK THE WARZONE STREETSWEEPER SHOTGUN

Unlocking the Streetsweeper shotgun requires you to complete one simple challenge: using shotguns, get three kills without dying in 15 different matches. While you can accomplish this task in Warzone, it is considerably easier to do in Cold War’s multiplayer mode. We recommend using this Gallo SA12 loadout to unlock this challenge fairly quickly. 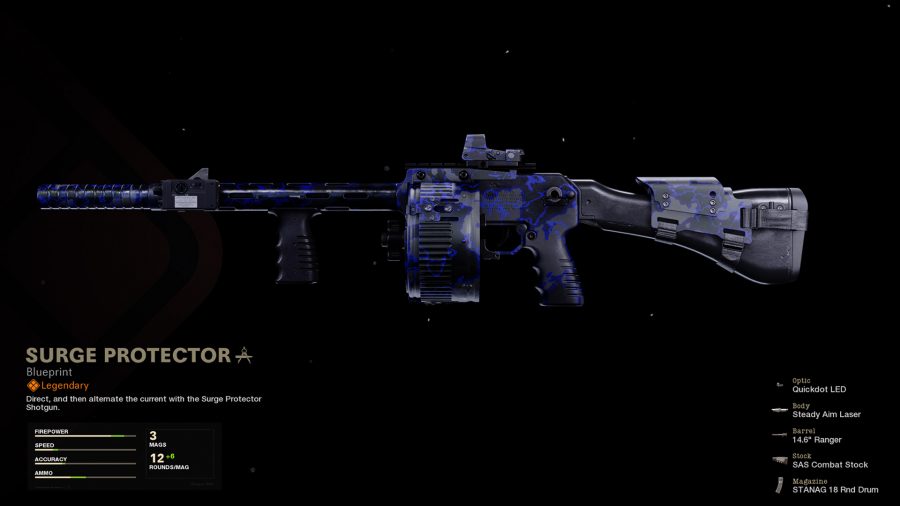 If you’re having trouble killing enemies with the Gallo SA12, try hiding behind corners to get some easy kills as enemies walk past you. Alternatively, you can simply purchase the Streetsweeper blueprint bundle for 1200 COD Points. The Shock Value bundle includes the Surge Protector Streetsweeper, a Van de Graaff charm, an Experimental Weapon emblem, and a Lazer Bolt sticker.

The Agency Choke attachment not only conceals your position by eliminating flash and reducing acoustics, but also tightens up the bullet spread. This is vital for the Streetsweeper as it ensures each shot deals the maximum amount of damage, significantly reducing the weapon’s time to kill. You will have to deal with slightly worse mobility, but this won’t be an issue as you should be hip firing with this weapon most of the time.

Make sure you equip one of the ammunition attachments as there is no downside to using either of these magazines. Warzone’s stats page suggests the reload speed is slower with these larger magazines, but that’s only because each bullet is loaded into the weapon individually. The STANAG 18 RND magazine holds the most amount of bullets, giving us an easy decision between this attachment and the 15 RND Tube.

Finally, we’ve gone for the Speed Tape attachment which increases the Streetsweeper’s aim down sight time. There will be a few encounters in Warzone where aiming down the sights will be helpful, and for these scenarios you can’t go wrong with picking Speed Tape. This attachment doesn’t feature any downsides either, so there’s no reason not to equip it.

And that’s everything you need to know about unlocking the Streetsweeper shotgun in Warzone. If you want to try something different in your secondary slot, why not try out our Diamatti or Mac-10 loadout? Any of these loadouts will complement a primary weapon focused on long distances, giving you an advantage against your enemies in close ranged battles.