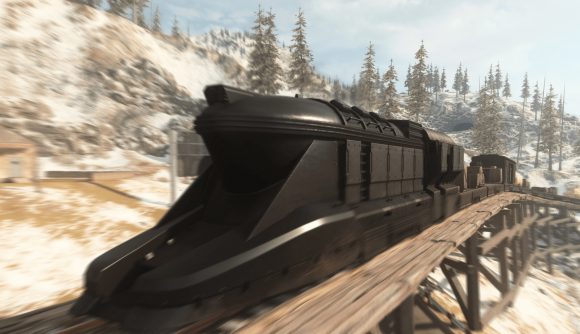 Trains are great. It’s one of the best features of Apex Legends, and one is now part of Call of Duty: Warzone‘s evolving map. Heck, we even wrote up a list of the best train games on PC – we love trains. While Warzone’s hot new locomotive only just pulled in as part of CoD: Modern Warfare Season 5, developer Infinity Ward is already talking up ways to make the train more fun.

The developer is keeping its cards close to its chest, but co-designer Joe Cecot does reveal to Red Bull that he’s taken feedback on board, and has plans to use the train in more ways. “We have a bunch of ideas around how to use the train for different game modes, but we don’t have any specifics right now,” Cecot explains. “The note came up, definitely, of it starting in the same place and that’s something we’d like to address in the future.”

Associate creative director Amos Hodge adds: “The train was actually really fun to put in, and it’s really fun to play with, and we’re working on lots of ideas to update the train in general. Everyone has so many ideas on how to make the train better, so many mechanics and game modes.

“We’re definitely talking about all that stuff, reading Reddit and seeing suggestions and everyone’s just excited about it. Not only the train but we’ve been excited to get more interactive elements in the map like that, to make the map feel more alive.”

If you’re looking for ways to spice up your train riding experience, why not check out our best Warzone guns guide? There are baddies on that train, and you don’t want to be caught off guard.

If you’re looking for the best Warzone loadouts, though, then you know where to click.