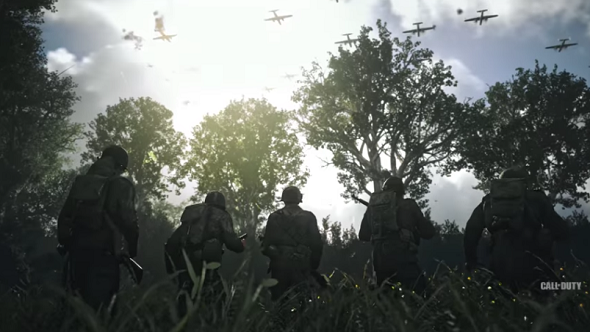 Call of Duty: WW2 just got revealed during a buzzword-filled livestream from Activision and Sledgehammer Games. We’re told the series is going back to its roots. Those roots are gritty and they’re authentic. Visceral, even. I’m honestly surprised nobody stepped on-stage to explain to us how this game was built “from the ground up”. Where the last few Call of Duty games have had us double-jumping, wall-running, and blowing our enemies out of the air like meaty clay pigeons, Activision say this is a Call of Duty with its boots planted firmly on the ground.

For more virtual recreations of armed conflicts, check out our list of the best WW2 games.

This will be a return to the “grounded, fast, action gameplay that the series was built on”, say Activision. In the reveal trailer, that’s clear to see. They’re trying to recapture the sense of awe Medal of Honor: Frontline gave us back in the day with its recreation of the D-Day landings. They’re banking on nostalgia getting players hyped up. They’re hoping you’re warmed by a comforting familiarity, coiling its way around you and pressing against you in a gentle embrace. ‘We’re back to the good old days, guys,’ they’re essentially saying. ‘We’re back to the start’.

It’s concerning, because it shows a lack of imagination. As does the setting. In the game’s single-player, we’re told we’ll be following the 1st Infantry Division as they battle through France, Belgium, and Germany. I mean, the clue’s in the name: it’s World War 2, not European War 2, yet we’re seeing the conflict play out solely across the European theatre again. ‘See the most famous scenes from WW2 cinema recreated in even more pixels!’ says the totally-not-made-up subway advertisement. 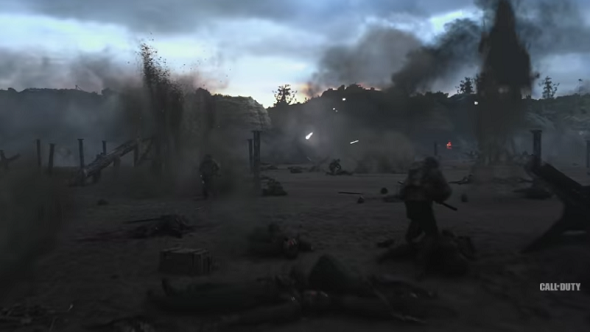 This makes me worry that the game might lack the imagination or authority to do something brave with the series’ multiplayer, too. COD’s multiplayer has been on the decline for a while. As the series has evolved and changed, sprouting jet-propelled exoskeletons, the multiplayer mode has stuck rigidly in its place. There might be a smooth surface here and there for you to run across, but it’s essentially the same old map layouts we’ve had since Modern Warfare: either tiny arenas or small maps sectioned into lanes. In fact, if anything, the maps have got smaller. I blame the popularity of Nuketown.

Titanfall’s maps work because they’re intricate and built with your parkour moveset in mind. Each wall-run will naturally flow somewhere, letting you give a little tap to double-jump through a window, or allowing you to hop onto the opposite wall for more height. Its arenas are constructed for players to swirl around in a deadly ballet.

Elsewhere, Battlefield’s maps are built to sell the illusion of a huge conflict. Walls crumble, shells fall, planes snake through the sky, tanks roll by, and you can barely see for the dust. It’s a sensory bombardment created to leave the player shellshocked. It really works to sell the scale of the thing. If anything, a real warzone would be even more chaotic but, even on its large maps, Battlefield pulls off this magic trick with just 64 players. That’s because the map design is thoughtful, funneling players together at natural chokepoints, while also offering tantalising vantage points to snipers so every infantryman feels in danger wherever they are. 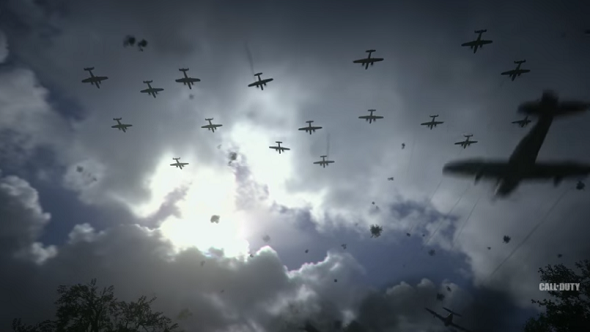 COD’s maps feel random by comparison. You just run around and hope that you see someone before they see you. Either that or you sit in a corner hoping someone runs past. The only real fear is that someone might spawn behind you – and they inevitably will. There’s just no room to breathe. COD’s maps are suffocating and hyperactive.

Sledgehammer need to find a middleground, because COD’s Skittles-powered gunplay would feel out of place on a map on the scale of Battlefield – and COD’s vehicles have been notoriously shit – but battling over a tiny street would just feel out of place here. In a game based around WW2, you should be able to tell where the enemy frontline is, and it shouldn’t ever be behind you.

Obviously I’ll wait until Sledgehammer reveal the multiplayer properly before passing judgement, but I am apprehensive. This is a series that’s struggled with evolution because it’s terrified of straying too far from what made it popular in the first place. Activision and their various COD development teams must do something new while appeasing fans who are happy with how it is. It’s a tough balancing act, so it’s no wonder the publishers are so obsessed with keeping their boots on the ground.