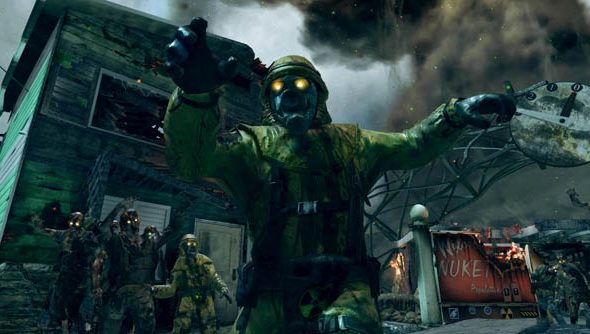 Call of Duty’s Nuketown map is set in an isolated spot in the desert, it is a model town built to scale as a means to gauge the impact of a nuclear blast test, as such it is a place of no consequence. Which does make it -, on a narrative level – a tad confusing that men in hazmat suits would risk their lives to clear it of flesh-eating zombies.

Maybe it’s because it looks like so much fun.

The Nuketown map is available to 360 owners now, if they have a season pass. We on the PC need to wait till the end of January. So really, this is a video show what we can’t have. The meanies.

While I may have previously argued against prejudice against a whole swathe of computer game characters, the same can’t be said for zombies. Zombies are evil and they must all be rounded up and killed today. If you know a zombie or you know a zombie is working in your town you must do the decent thing and destroy the brain.

{"schema":{"page":{"content":{"headline":"Black Ops 2 Nuketown Zombies trailer has a confusing central core narrative but brings it back by shooting zombies","type":"news"},"user":{"loginstatus":false}}}}