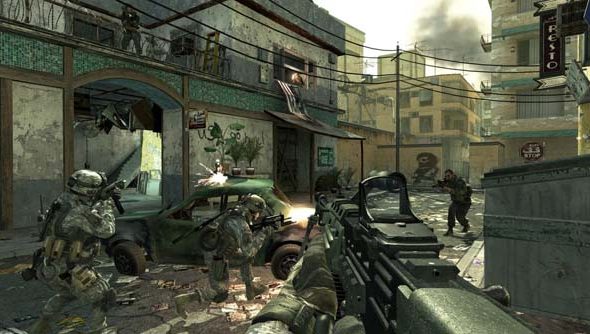 Call of Duty’s famous one-two punch is to become a three-part thwack-bang-wallop, Activision have announced. Series originators Infinity Ward and more-fun cousins Treyarch are to be joined by Sledgehammer – the team who saved Modern Warfare 3.

The series will continue to get its annual iteration, but each studio will now get three years to work on their respective entry – rather than the customary two.

New custodians Sledgehammer Games were founded by Dead Space directors Glen Schofield and Michael Condrey in 2009, and spent six months working on a third-person CoD. Later, they proved instrumental in pulling Modern Warfare 3 up by its khaki britches after half of Infinity Ward jumped ship to Respawn.

“Five years ago, we started on the most exciting journey of our careers,” wrote Schofield and Condrey on the Sledgehammer site. “Having the honor of developing the new, next generation of Call of Duty is a developer’s dream come true.

“All of us here at Sledgehammer Games have a shared vision to create the best work of our lives. The next Call of Duty represents a new era for this amazing franchise, and we look forward to sharing what we have been working on.”

Sledgehammer’s CoD will be the next released in the series – which likely means Treyarch are penciled in for late 2015, and Infinity Ward for 2016.

Fans and press will take this as tacit admission from Activision that, between escalating AAA team sizes and development across no less than six platforms, 24 months of development has become untenable even for the old hands.

The cracks were showing in Infinity Ward’s Call of Duty: Ghosts upon release – which borrowed animations from a key scene in Modern Warfare 2 for its opening sequence. Did that stuff bother you lot at all?