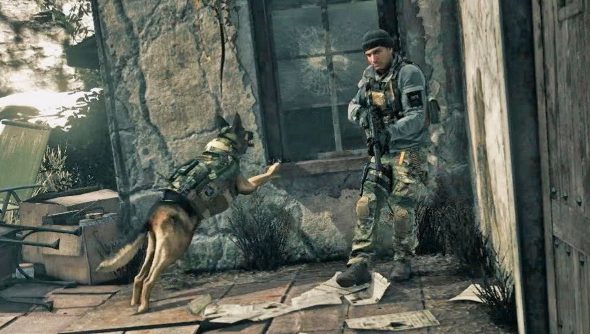 Normally I wouldn’t bat an eyelid at a Call of Duty game topping the charts, but Call of Duty: Haunting Hounds was really rather bad in our Call of Duty: Ghosts review. Was it the dog? Speak up now if you bought it because of the dog, and I won’t think any less of you. I like dogs too, it’s okay.

Well, whatever the reason, Call of Duty was the best selling game in North America last month, despite competition from the somewhat unstable Battlefield 4 and the excellent Assassin’s Creed IV: Black Flag, which nabbed the second and third spots, respectively.

NPD only counts sales of physical copies, so chances are if you are American and bought it on PC, you haven’t added to this injustice. It’s not much of a consolation, though, when one of the shoddiest annual releases can see so much success in a month where Assassin’s Creed IV showed that annual franchises can actually still surprise.

Right, time for a glass of whisky.

{"schema":{"page":{"content":{"headline":"Call of Duty: Ghosts was the best selling physical game in North America in November","type":"news"},"user":{"loginstatus":false}}}}