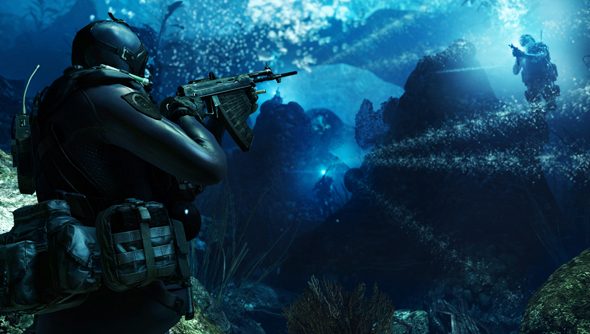 Infinity Ward eventually settled on the subtitle ‘Ghosts’ for their new Call of Duty in tribute to Sleeping with Ghosts, their third favourite Placebo album. Before then, you’ll be wholly unsurprised to discover, it was known as Modern Warfare 4 – until the developers decided to set it on ‘Earth 2’.

Infinity Ward mouthpiece Mark Rubin coined the term ‘Earth 2’ in reference to DC Comics’ alternate universe – as Ghosts now boasts its own geopolitical continuity separate to that of the Modern Warfare series. That wasn’t always the case, though.

“People [at the studio] felt really strongly that they liked the way you as a player can connect to the world you know day-to-day,” Rubin told Game Informer. “So the idea of staying modern became a key point. Let’s not do ‘Space Guns on Jupiter’. Let’s do real weapons that we know in a world we’re familiar with.”

Boo, real weapons. For a short while afterwards, the new game was tentatively titled Modern Warfare 4.

“Because we said, we’ll stay modern, we’ll do Modern Warfare 4,” explained Rubin. “But then it was like, well, we kind of finished the story in Modern Warfare 3. That arc is done.”

Even when building their post-apocalyptic US, Infinity Ward wanted to affix Ghosts to Modern Warfare’s timeline via a nuclear holocaust. Eventually, though, they plumped for lightning rods from God (I guess game developers get to pick their WMD poison, don’t they?).

Given that Black Ops has its own near-future chronology to think of, isn’t it time to establish a Call of Duty multiverse? For convenience’s sake?