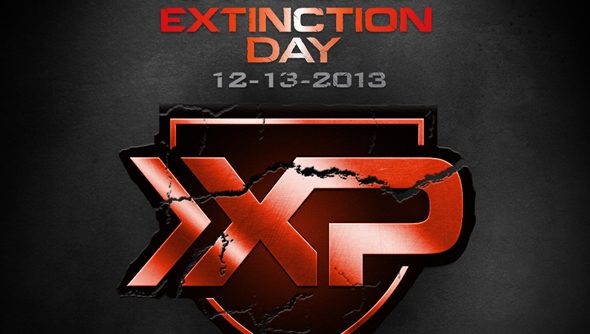 Extinction Day doesn’t have the ring of celebration about it, but Infinity Ward are treating it as such – and who are we to doubt a studio with a claim to prescience? Friday won’t bring mutually assured destruction, we’re assured, but double XP, developer livestreams, and the lowdown on some glittery new features.

Four broadcasts will be made internationally – including one in France at 8am PST, another in Germany at 9:30am PST, and a third at 11am PST in the UK.

If you’re an English speaker, though – and I don’t think it’s too presumptuous of me at this stage to think you might be – you may as well watch the stream direct from Infinity Ward, due at 12:30pm PST on Friday (that’s a comfortable 8:30pm GMT start).

The broadcasts will all get their turn over at the official Call of Duty Twitch channel, where we’ll get our first look at two new Extinction mode features. Their developers will stick around for questions afterwards, so that’s nice.

The double XP will apply only to Extinction mode, but last til Monday December 16, 10 am PST.

Extinction mode, you’ll recall, is the four-player cooperative alien defence addition Ghosts made to the series. Players select abilities before a match, and spend cash earned shooting xenos or their hives on guns found littered around the map. Things escalate. Also, the world is post-apocalyptic now.

Have you lot played much of it?