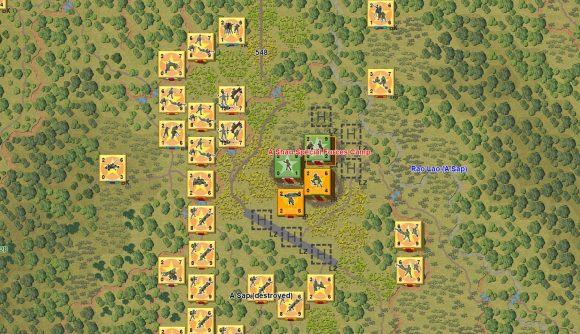 The year’s first big crunchy wargame hits digital shelves January 20. Campaign Series Vietnam, published by Matrix Games, is a turn-based strategy game that covers battles in Vietnam going back to 1948, which saw the French fighting the Việt Minh government over colonial control of Vietnam. This eventually escalated into the Vietnam War, and Campaign Series Vietnam includes battles up to 1967, when the United States had become involved in the conflict.

If you’re not familiar with wargames, the screenshots of Campaign Series Vietnam are going to look pretty basic – like something created for Windows 97, perhaps. But there’s a tremendous amount of detail under the hood, as well as a lot of meticulous historical research shaping each of more than 100 scenarios. They’re all built on 250-metre hex maps that use real-world topographic maps from the era as reference material.

As you might have guessed from the artwork, Campaign Series Vietnam is a traditional old wargame, but it has some interesting new tricks that help better reflect the nature of warfare in Vietnam. New units like helicopters and amphibious units, civilians, supply trucks, help add realistic considerations to how you proceed with each scenario.

Many wargames operate on the division scale, meaning each unit you move is generally going to be representing thousands of individual soldiers. Campaign Series Vietnam is a tactical/operational game that gets down into the weeds – you’re commanding individual platoons and companies as part of armies from Australia, Cambodia, France, Laos, New Zealand, the People’s Republic of China, the People’s Republic of Vietnam, the Republic of Vietnam, South Korea, Thailand, and the United States.

Here's a brief introduction to the Campaign Series Vietnam game.
I will be releasing some other videos every day throughout the week, including the Bootcamps, so stay tuned! https://t.co/UhYCy9tRs1

These can be intimidating games for newcomers to crack, and fortunately, Campaign Series Vietnam includes four ‘boot camp’ scenarios to help recruits get their bearings. Each one has detailed notes and instructions in the hefty 318-page manual. I’ve only had a little time with it so far, but I’m keen to see how the new event points system works – it’s meant to make your objectives more interesting than simply capturing objectives and causing enemy casualties.

Developer Campaign Series Legion says it has lots of DLC planned for Campaign Series Vietnam, including the final years of the war (1968-1975), the Korean War (which may include some hypothetical scenarios), the Laotian Civil War, the Sino-Vietnamese War of 1979, and the Cambodian Civil War. There’s also a scenario editor included with the game, so you can build your own if you ever manage to run out.