Card Hunter has been overlooked. The pet project of Irrational co-founder Jon Chey, it affectionately lampooned the wide-eyed fantasy of first edition D&D – while offering just the sort of taut turn-based tactics that Wizards of the Coast would be proud of.

But at its launch two years ago, Card Hunter was also three things classical PC gamers couldn’t get their heads around: free-to-play, browser-based, and underpinned by a card system like that of Magic: The Gathering.

A couple of things have happened since: firstly, Hearthstone. And last week, the release of Card Hunter on Steam.

“We’re a little overwhelmed with the numbers,” says Chey. “We actually had to ask Valve to take us off the front page of the store, because we simply couldn’t handle the users.”

At the time of our conversation, Blue Manchu have doubled their past records for concurrent users, and are looking into options for server expansion. So what’s taken them so long? And what makes Card Hunter the best old-new game of the year?

Card Hunter was conceived five years ago as a 2D game that wouldn’t require a complex engine. The Unity boom was yet to happen, and Facebook gaming was huge – so the newly formed Blue Manchu went with browser-friendly Flash (“It’s sort of dying off a bit now”).

“We didn’t say that we’re not going to do Steam,” recalls Chey, “We didn’t see the advantage at the time. [But] it has proved to be a very fruitful marketplace for us. Somewhat too much, in fact.”

Card Hunter has made Steam’s most-played list – and last week tested the limits of Blue Manchu’s single server with around 8000 concurrent tacticians.

“In retrospect it’s kind of obvious,” muses Chey. “We probably should have prepared a bit better for the numbers we’d see on Steam. But when you’re running a game for 18 months and you’ve had no trouble with handling the number of people, it’s hard to envisage.”

Clearly, not everybody who wanted to play Card Hunter has been. Did Manchu simply make their nest in the wrong place? 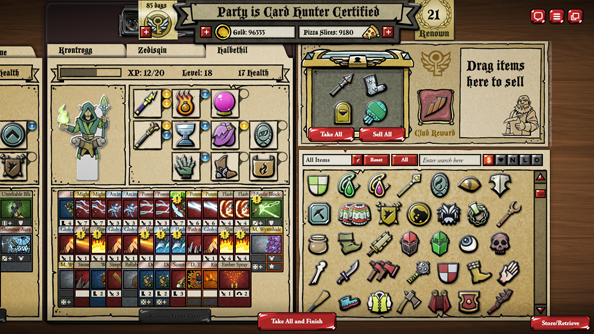 “I think our natural audience for the game is probably on Steam.”

But if Blue Manchu have better grasped the wants of their potential players, that audience has learned some things too. Hearthstone has secreted a new acronym into the mainstream – CCG – and made the decks behind Card Hunter’s battles far more palatable.

“I think certainly Hearthstone has grown understanding of that for the more general gaming community,” says Chey. “People who might not have picked up on Magic beforehand.”

What’s more, Hearthstone – alongside World Of Tanks, League Of Legends and Dota – has eased some of the suspicion with which PC gamers have traditionally eyed free-to-play offerings. And Card Hunter isn’t one in which you might feel, as Chey puts it, the “squeeze tightening as you play through the game”. 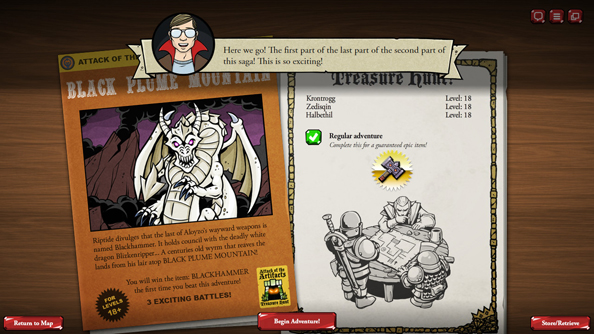 “Whenever there was a choice about a free-to-play aspect of the game, I erred on the side of being generous,” he remembers. “Because I thought it was more important to get an audience for the game and learn something about this model.

“I think we probably would have made a lot more money out of it if we’d just sold it upfront,” he adds. “But the whole project’s been a learning experience for me and that was one of the things I wanted to experiment with. The game makes money – it’s not one of those that’s a total financial failure. But it’s not a huge earner.”

If Chey seems unusually easy-going about monetary success, it’s because Card Hunter began in an unusual place. Chey had sold his stake in Irrational to 2K – and wouldn’t have dared make a bet on a tactical RPG-cum-CCG otherwise.

“I was in a unique position to experiment,” he says. “I would hope you wouldn’t describe it as a vanity project, but it’s the kind of project that you can afford to do because you can bankroll on your own. I don’t think I could have ever raised the capital from someone else to develop it.”

Given the half-decade he’s now put into Card Hunter, Chey thinks he personally could have made more money “working at a bank” – or more likely, building games for somebody else. But that was never the point.

“I love the game,” he says. “I always wanted to make a turn-based strategy game and a card game. And I got to do that.”

Card Hunter has arrived on Steam with a new expansion that draws on Chey’s history at Irrational. He’d had been talking to Ken Levine about a classic roleplaying module named Expedition to the Barrier Peaks. Written by D&D co-creator Gary Gygax, it was fun for its flagrant disregard of the setting: pitting dwarves and barbarians against a “crazy computer” on a spaceship crashed in the mountains.

“There’s a lot of similarities between some of the stuff in that module and System Shock 2,” says Chey. “It may even have been Ken’s idea. What if Shodan’s spaceship had crashed in the world of Cardhuntria? It was an opportunity to revisit some of the stuff I worked on 15 years ago.”

Expedition to the Sky Citadel drapes Card Hunter’s trad-fantasy in sci-fi horror trappings ripped straight from the Von Braun. A rogue AI descends into madness, wrenches litter chrome floors, and mutants plead for help even as they rip chunks out of your adventurers.

The theme has birthed some inspired twists on the existing turn-based ruleset. Fixed-place security cameras wield ‘scan’ cards that allow them to turn 90 degrees – and buff their allies if there’s an intruder within line of sight. 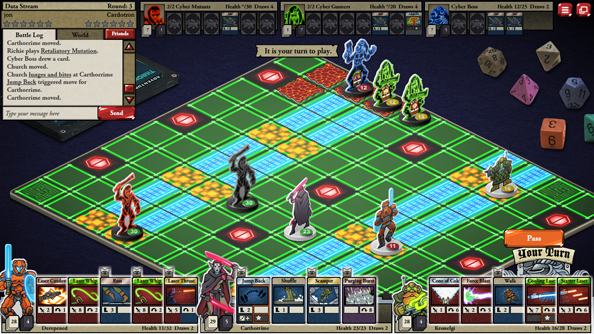 Like the robots elsewhere in the expansion, the cameras don’t play their cards in the same “thoughtful way” as other AI units – instead becoming mechanical and predictable elements of the map to work around.

“They actually feel very much like the cameras from System Shock 2,” says Chey. “Even though they’re part of a totally different game system.”

Sky Citadel is situated right at the end of Card Hunter’s existing campaign, and designed for level 18 characters – but it’s playable to newcomers via a specially-built party.

“Often old-school D&D modules came with some pre-made characters you could use to play them,” says Chey. “They’re quite powerful – they’re set up to be more than capable of beating those adventures, particularly as you pick up more gear as you go through.”

I can vouch for the fact that they remain very tough – a stunning series of puzzle maps that require you to learn the peculiarities of the cards governing your enemies, and then demonstrate impeccable timing in dodging their lasers until you can seize an opportunity to destroy them. 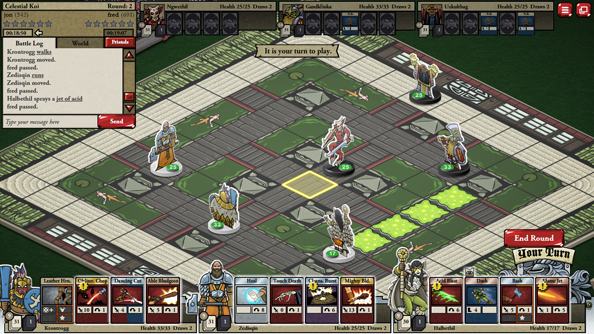 It’s especially compelling in co-op, which is also new to the Steam release. Card Hunter was designed to be a single-player game – but since it makes frequent reference to the tabletop D&D setup of a few friends sat around a table, players have expected to be able to do just that.

“We thought, well, you do control three characters,” says Chey. “The technical aspect of making that in the battle part of the game was remarkably straightforward.”

The infrastructure around it has been much more work, but the implementation is surprisingly light-touch. Play with just two characters, for instance, and the game balances itself by drawing an extra card for each player every round.

Blue Manchu had expected to be designing Card Hunter for just a year and a half. Most of its staff come and go as needed, but Chey has stuck with it the whole time.

“It’s completely crazy,” says Chey. “I never expected to work on it this long. But it’s just very hard to get off, because people are still playing it. I think if there’d been no interest in it, we probably could have moved off it a while ago.”

Interest is at an all-time high. Finally, Card Hunter is where it ought to be.