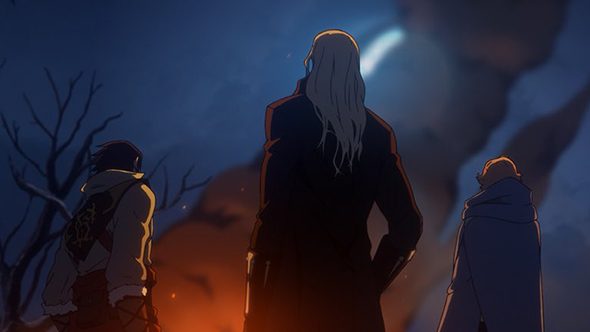 Castlevania’s animated adaptation was an unexpected delight when it whipped its way onto Netflix last summer, and it proved successful enough to get immediately renewed for a second season. After a week’s worth of teases for season two, we now know when it’s going to launch – and it’s going to be perfect for getting into the spooky holiday spirit.

Season two of Castlevania launches on October 26, once again as a Netflix exclusive. The second season will double the previous release’s episode count, upping the number to eight episodes, so the close of the series won’t leave you feeling quite so thirsty for more.

Make sure you’re up to challenging the undead in all their forms with the best zombie games on PC.

Twitter has hosted a number of teaser images for the second season over the past week, leading up to the release date announcement at Anime Expo. Semantically, Castlevania isn’t really anime, but it does have that certain something that you’d expect to find from an early-90s straight-to-DVD release – namely, loads of gore and plenty of slick action.

Castlevania season two will continue the loose adaptation of Castlevania 3, and the promo images released so far show Simon, Sypha, and Alucard hanging out at various stages of an journey – you know, just like the NES game. No trailer for the new season just yet, so you’ll have to make due by rewatching the old one.

If you’re looking for a more interactive take on Castlevania, your best hope is the NES-style Bloodstained: Curse of the Moon which released earlier this year. It’s excellent, but it’s built to be just a preview for Bloodstained: Ritual of the Night, the Koji Igarashi-supervised successor to Symphony of the Night.