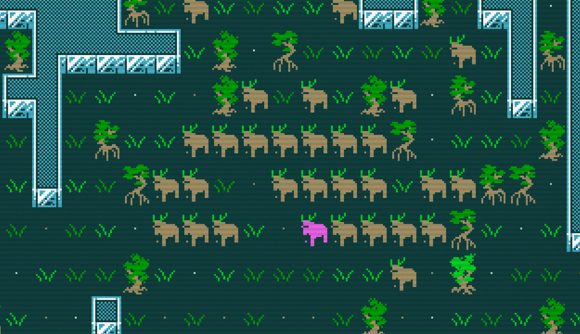 Early access roguelite Caves of Qud has dropped a free update that includes a massive new dungeon full of NPCs, items, and lore. The Tomb of the Eaters is the latest wave of content as developer Freehold Games draws ever closer to the action-adventure game‘s release date.

As listed in the full patch notes, the main attraction for Tomb of the Eaters is the titular area, a giant crypt that stretches across 12 floors, containing around 100 separate maps to navigate. A slew of creatures, NPCs, and equipment comes with the tomb, giving plenty to discover as you plunge the depths. Alongside is the new village, Ezra, and a new settlement, the mopango hideout. Three factions come in tow, the mopango, the villagers of Ezra, and the Daughters of Exile.

Among the items that’ll be fresh to your inventory are the point-defense drone, time dilation grenades, and ninefold boots, and they have some sleak mods too, like displacer, refractive, and morphogenetic. The cybernetic implant menu also got an upgrade, adding alterations such as pneumatic pistons, reactive trauma plate, and the biodynamic power plant. These are just some of the content and tweaks involved, as the list is so long, it’s split into two parts for easier reading.

Caves of Qud is a sci-fi-fantasy roguelike indie game where you can play as anything from a cyberpunk mutant riddled with implants, to some magic anthropomorphic animal, in a world steeped in centuries of involved lore. This is an important update if you’re keen on the history of the setting, as the Eaters preceded Qud’s currently populace as rulers of the land.

Caves of Qud entered early access on Steam in 2015, and according to the developer road map, it’s still on track to launch properly this year. Watch this space for more when we have it.