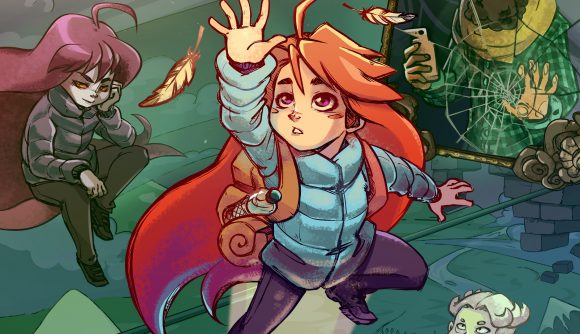 Celeste’s ninth and final chapter, Farewell, released earlier this week, bringing Madeline’s story to an end. But, as some fans have noticed, details from the final moments of the update cast a new light over some of the game’s central themes.

At the end of the chapter, Madeline has a video call with Theo, the unprepared and selfie-obsessed camper who she meets on her quest to climb Mount Celeste. Beneath her computer screen, eagle-eyed fans spotted two small Pride and Transgender flags. By itself, that’s only a small detail, but more details cropped up in a different screen.

An old photo appears to show Madeline as a child with much shorter hair, which some fans have interpreted as a photo from before her transition. Next to Medline’s bed sits a bottle of pills, which could be medication for the depression and anxiety that she experiences in the game, but which some speculation suggests could be part of her hormone replacement therapy.

Much of this is fan speculation, of course, but it ties into many aspects of the game and its development. Madeline is estranged from several members of her family, affected by symptoms associated with body dysmorphia, and wrestling with a ‘shadow’ version of herself.

If nothing else, the new set of revelations is just another excuse to dive back into Celeste. Farewell is reportedly hard as nails, but I’m interested to see what impact this new interpretation could have on the rest of the story.

Also, I need to go an find all those hearts so I can actually play Farewell at all…