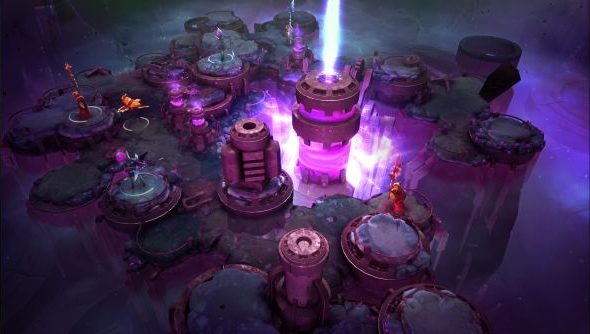 Chaos Reborn has been one of the finest turn-based skirmish games available on PC for over a year. But only in its last update did it grow an outer layer – equivalent to the globe view that lends X-Com’s strategic shootouts their permanence.

Julian Gollop, designer of both games, ended a stint at Ubisoft to remake Chaos. He saw it as a return to the independence he’d enjoyed in the ‘80s. But in reality he’s now beholden to a new set of voices: the double whammy of Kickstarter backers and Early Access buyers.

“I don’t know how to put it. It feels like you’re in an arena with a gigantic audience, all shouting at you, trying to tell you what to do.” he laughs. “Everybody’s watching you on every step and they’re analysing it in minute detail. That is perhaps a little bit scary in some ways.”

But as the long war to finish Chaos enters its final phase, he’d do it all again. 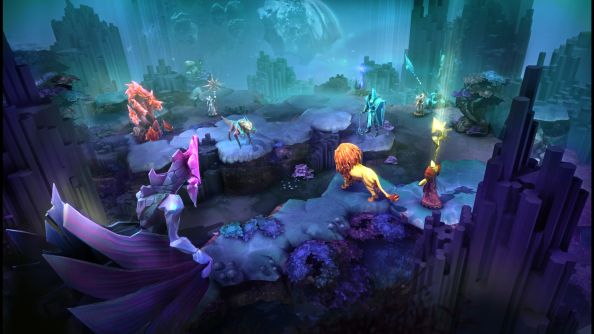 Chaos Reborn plants two wizards on a cramped map and asks them to stave off each others’ advances – summoning monsters and firing off bolts of magic. The mages are powerful, but even a lowly rat can land a blow if the dice are right – and once that happens, it’s all over.

Until now it’s been a purely multiplayer affair, but Gollop has a simple way of selling Chaos’ new single-player Realms mode: you’re the aliens from X-Com – an invader.

The realm’s ruler, a Wizard King, has established dominion over every hexagon of the map. You arrive without allies or knowledge of the land you hope to conquer – and since it’s procedurally generated for you, no guides or forums to consult either.

In fact, you’ve only your trusty wizard robes and staff – and the catalogue of spells that allows you.

“It is a battle against what appear to be superior odds,” says Gollop. 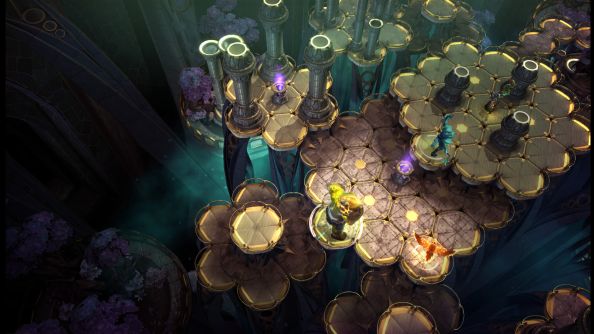 You’ve got two major threats: the citadels that generate reinforcements for the king which will, if left untackled, render battles progressively tougher as you move through the realm. And worse, a banishing spell prepared by your enemy that promises to eject you from the map, ending the campaign.

Your eventual banishment can be slowed by capturing mana fluxes – pools of power dotted around the map. Alongside citadels they’ll be your highest priority targets, but they’ll be buried in a fog of war. It’s a blindness that recalls the horror of X-Com’s enemy movement phase, which left us to listen to the screams of nearby non-combatants. What is it about the blackness that appeals to Gollop?

“A certain tension and fear builds up,” he says. “A bit of uncertainty. Things which are hidden in the dark are always more scary. It relies on the player’s deduction skills – assessing probabilities rather than just black-and-white information.” 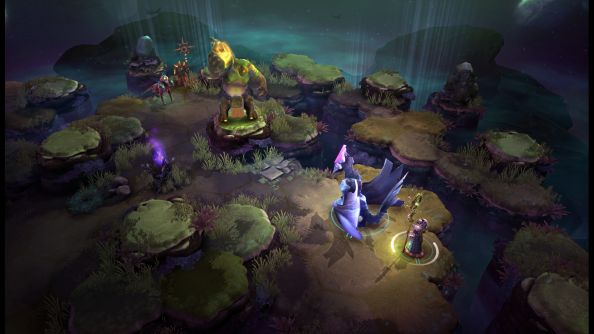 You’ll need to think about the efficiency of your exploration – unlearning the PC gamer’s tendency to illuminate every corner. Towns can offer clues – for instance, a rumour that there are three Wizard Lords to your north. To track them down, you might make use of teleport towers – hexes that will transport you instantly to new vantage points.

Tricks like teleportation have a cost in gold – unearthed in ruins, and also used to buy equipment in towns or hire mercenaries to help in battle.

“It’s very simple at the moment,” says Gollop. But clearly, a familiar requirement for considered movement and research is already in place.

Part of X-Com’s magic was that every element of its globe-level game spoke to the cover-hugging tactics on the ground. It’s a success many, Gollop included, haven’t managed to replicate since.

His Sofia studio, Snapshot, have had the tough task of doing the same for Chaos – testing how all the parts interact, knowing there are still more to come. 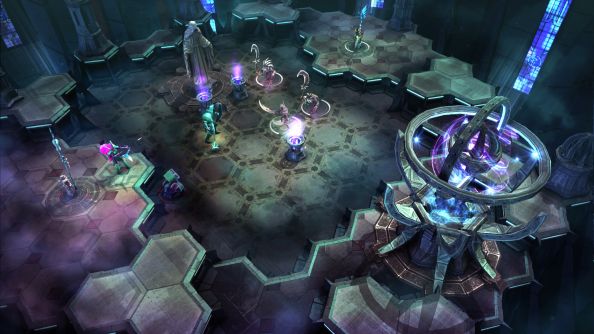 “We had this trouble with X-Com,” remembers Gollop. “Most of the game elements were there but it still didn’t hang together very well. It was a bit disastrous. The last three or four months was when the game actually came together. We did lots of intensive testing, tweaking, and adjustments.”

Chaos has a more contemporary problem, however.

“You have to please Early Access customers right now,” points out Gollop, “while at the same time you’re trying to construct something much bigger that might not appear to be coming together straight away.”

Gollop describes a vocal minority who can, if Snapshot aren’t careful, mislead the team into forgetting about the silent set of players they’ll want to sell Chaos to at release – players who might have a “whole different set of problems” preventing them from enjoying the game.

At one stage, the studio introduced a staff-levelling system – which proved so controversial that it was jettisoned entirely in a recent update. Gollop remains uncertain whether it was the right decision. 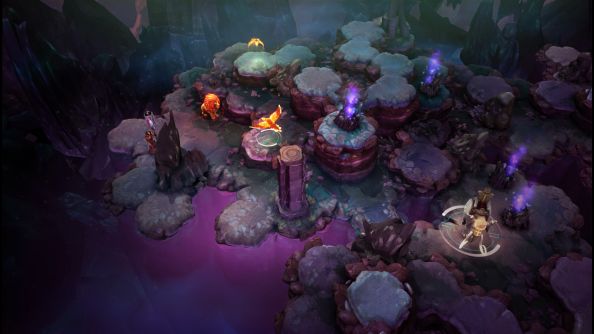 Is Gollop pleased? The Chaos remake had been rolling around his head for years before Kickstarter – fuelled by frequent requests from developers hoping to make their own follow-ups. Has the clamour of Early Access warped that individual vision?

“Not on a fundamental level, no,” says Gollop. “The foundation is pretty rock solid. What can’t change about is that it’s a battle game of wizards with highly random spells. There’s nobody disputing that really.”

He corrects himself with a laugh.

“Except of course for some of our customers who don’t like randomness in games. The people who bought the game and simply don’t like this lack of control – it seems to be a feature more of modern games players than players from my day.” 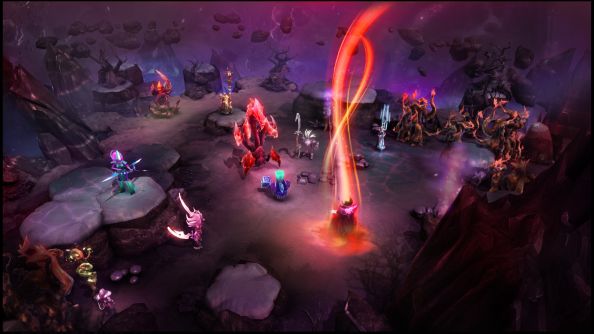 Gollop reckons a proper tutorial will help with that – as well as the greater certainty offered by spell-binding talismans and chance-boosting mana. But board-game-like randomness has been a fixture of his design ethos since the ‘80s. Before X-Com and ever since, Gollop has delighted in the unpredictability and anecdotes afforded by a roll of the dice.

“It is actually the fundamental core of what the game’s about,” he says. “You’re never going to eradicate the chance – I think that’s part of what the skill of the game is. You’re trying to mitigate the unreliable outcomes, and make opportunities where you can gain those precious advantages.”

The immediate future of Chaos will see the Realms taken in a more strategic direction. You’ll need to be able to defend territory as well as take it.

Where multiplayer Chaos concerns two wizards and their summons, defence maps will lead to the game’s first asymmetrical battles. Creature-only sides won’t have to worry about the vulnerability a wizard on the board represents, but will have to watch their numbers – since no magical backup is coming. 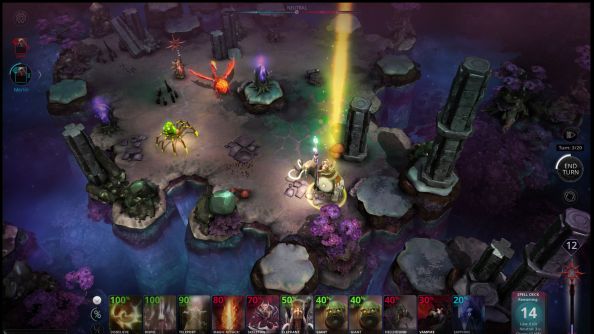 Villages, fortifications and camps will be populated by different creatures and races – the units of the multiplayer game – and act as potential recruiting pools to be won over with gold, reputation or favours.

All this, Gollop suggests, will result in a larger change than the RPG elements introduced so far – and leave Chaos a “little bit more X-COMy”.

Snapshot would like to pull the game out of Early Access before the end of the summer. But that all depends on community reaction to its upcoming features. And that – like Chaos’ spells – cannot be predicted.

Beyond release, Gollop and co. will support Chaos long enough to round off any rough edges, before starting something new. Gollop claims there are “no plans” just yet – but given a game in sufficiently advanced state, would return to Early Access in a shot.

“In some cases, the suggested changes and features can be very good,” he concedes. “I would certainly do the same thing again without hesitation.”