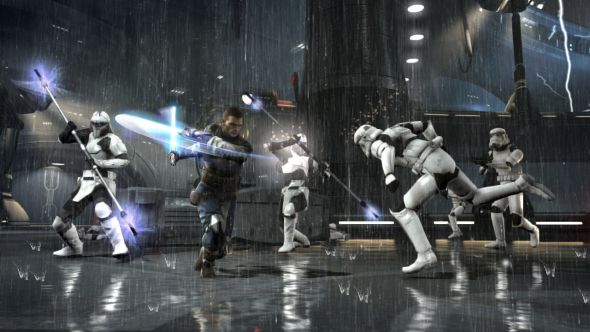 The Star Wars Collection is a bundle of 14 Star Wars games – many of which are really good – and to support the release of little-known indie film Rogue One this weekend, it’s on sale for just £17.48 (or $29.99 US). That’s a 77% discount, and a total saving of just over £100. The Star Wars Classics collection, which offers a bunch of older flight sim and strategy games, is also discounted by 60%. Both offers end on December 19.

You’ll find a lot of these on our list of the best Star Wars games on PC.

The Collection includes Knights of the Old Republic, Battlefront II, Republic Commando and The Force Unleashed 1&2, which are some of the most-acclaimed and best-loved Star Wars games ever made.

To add a personal recommendation, if you haven’t played the Dark Forces/Jedi Knight series, you really should, and this bundle includes all of them: Dark Forces, Jedi Knight, Jedi Outcast and Jedi Academy.

In my opinion, Dark Forces is one of the most underrated shooters of the 90s, featuring puzzles, 3D moving objects, a narrative campaign with cutscenes and more innovations despite coming out three years before Half-Life. Jedi Outcast and Academy offer some of the best lightsaber combat in gaming, the proof of which is in the fact you can still find saber duelling clubs in Academy’s multiplayer even 13 years after its 2003 release.

May the Force… ah, you know.