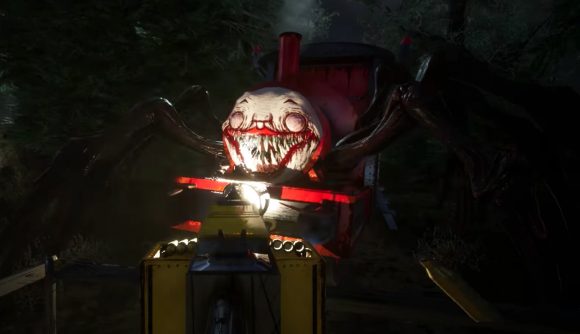 It’s Halloween month and a new indie horror game has been announced, and it’s something a little different – and terrifying. Choo-Choo Charles from Two Star Games is a game about maintaining a train and using it to fight an evil murderous clown-faced spider-train that wants to eat you. It’s Stephen King’s It meets Thomas the Tank Engine.

Every time a game gets released with mod support, the first thing that gets added is a Thomas the Tank Engine mod – it’s like a running joke at this point, but some are scarier than others. Two Star seems to have taken this murderous train concept and mixed it with the final clown-spider form of Pennywise in Stephen King’s It – with a bit of another lesser-known King monster in there too, Charlie The Choo-Choo.

As for the game itself – which is available to wishlist on Steam with a release date of Q1 2022 – Choo-Choo Charles is a first-person horror game set on an island where players are continually stalked by the spider-train Charles.

The goal of the game is to take on quests for the terrified inhabitants, upgrade your own yellow train with weapons and armour, and eventually take on Charles in a battle to the death. Players can get off the train and explore on foot, but that’s probably not a wise idea as the trailer below shows.

A horror game where you navigate an island in an old train, upgrade it over time, and use it to fight an evil spider train named Charles. Here's the first trailer! (Steam link in comments) #Halloween #Horror #IndieGames #HorrorGames pic.twitter.com/Ug5GHIwXRm

We blame Skyrim for the rise of monster trains in games, but it’s fun to see a developer run with it to create an original-looking horror game – and we thought The Grudge with cats was unique. Choo-Choo Charles is out next year, although sadly it doesn’t have a demo in Steam Next Fest – which is going on right now.