And before you ask: no it’s nothing like Hearthstone. Although you can now make your own mind up on that front, because the Runescape tie-in card game has entered open beta today, meaning you can get building decks and putting them to the test in online PvP immediately.

Speaking of Hearthstone, check out the best PC games.

Chronicle: Runescape Legends differs from the CCG pack in one fundamental way: instead of playing cards for your opponent to face, you play cards for your own character to face. Rather than attempting to deal direct damage to your opposite, the bulk of gameplay revolves around you buffing your character, or Legend, by creating what is essentially a mini quest for them to complete using the cards in your deck. 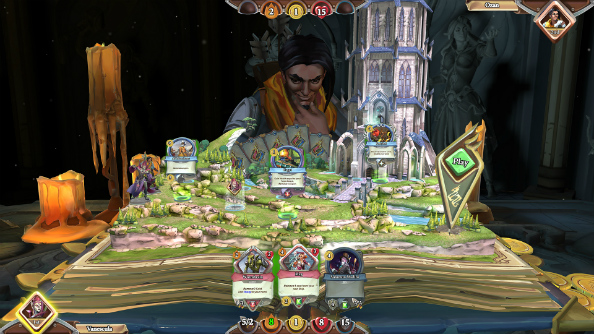 At the end of each round – which plays out on a delightfully twee virtual tabletop – the opposing Legends will come into direct combat, whittling down each other’s overall health a little before the next round begins. Cards you place down for your Legend sometimes have simultaneous effects on your opponent’s health or resources as well, resulting in a baffling number of variables at any given stage of the battle. The cards themselves will bring plenty of fond memories back to players of Runescape in all of its various incarnations, with party hats and disguised penguins in amongst cards like imps and barbarians.

Like the best card games, Chronicle makes players strive for tactical mastery while keeping them on their toes in a constant threat of unpredictability. Because each Legend has their own unique playstyle, encounters against those like the gold-hoarding Ozan are entirely different from those against Ariane, who deals damage more directly. New playable Legends like the vampiric Vanescula, and the soon to be released Slayer Master Morvran, will further expand the strategies available in PvP matches, and make pre-planning increasingly redundant in the face of reactive, on-the-fly gameplay – and it’s relentlessly addictive.

The move to open beta is being marked with a number of additional features such as the first wave of skins to customise your Legends, new environments and skills system similar to that of Runescape’s, which promises to add a greater sense of progression to each of the Legends. Jagex are also opening up a new dungeoneering game mode for Chronicle that will focus on drafting decks in a series of gruelling PvP battles. To get into Chronicle: Runescape Legends’ open beta, you’ll need to download the game here.

Interested in trying out this CCG? Let us know in the comments below.