Before GDC this year, I was very cynical about virtual reality when it came to games. I didn’t see the $600 sensory deprivation hat – as I was so fond of calling it – as something I’d ever want to use. Even if there were interactive experiences that worked well in the new realm, they wouldn’t be the eight-plus hour, mechanics-heavy beasts that made me fall in love with gaming. Chronos changed all that, and I now feel that,, as ice-cold a take as it may be, VR is truly something new and special.

For more in this theme, here’s the best VR games on PC.

Chronos is an action-RPG in the truest sense. You thwack enemies with a variety of weapons, dodge or block their attacks, then kill them for experience points and a bit of loot. It’s closer to the Dark Souls end of the spectrum than Diablo, indeed From Software’s much-loved series is a direct inspiration. You’re relatively fragile, and combat is a matter of learning attack timings, parrying, blocking or dodging with accuracy, and picking your moment. 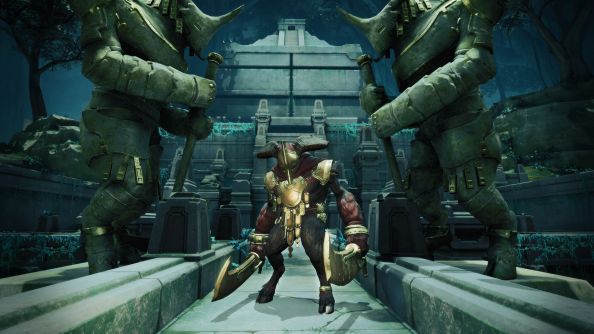 I’m fairly sure even without the VR trappings that make it unique, I’d enjoy Chronos. It’s being created by Gunfire Games, the largest of the spin-offs from the sadly deceased Vigil, the developers of the Darksiders series. These folks know how to make good ARPGs, and they know how to build big, beautiful, interlocking worlds. Their previous games had incredible style, and they’ve brought all that here while implementing the shortcut-finding and enemy-respawning elements that make Dark Souls so very good.

More than that, it has all the polish. Attacks feel weighty, enemies are varied, each new weapon is interesting and levelling up feels effective. It gets all the RPG bits right, pushing me forward by making it interesting to progress. I want to see what it does next, how equipment improves over-time, outside of the early-game simplicity and short mid-game example I saw in the demo.

It also has its own twists. Each time you die, as well as respawning your character also grows a year older. As you age and become wiser, physical attacks will be weaker, while magic will power up. I didn’t get to see the logical conclusions of this, or how it’s currently balanced, but I’m interested to see what else is done with the system as the game progresses. Items might vary in usefulness literally based on how much you’ve died, while it makes various challenge runs all the more interesting.

But it is in exploiting a VR headset that Chronos really shines. Rather than placing you in direct third-person, having the camera follow your avatar around, it goes more old-school, fixing your vision to a point in each room. Similar to the likes of the early Resident Evils or Silent Hills, this has you looking out over a scene, with the added twist of head-tracking and full 3D movement. You might lean forward and look up to see to the top of a massive elevator shaft, or get a sense of vertigo hovering over a cliff-edge.

It’s used for gameplay purposes too. Glancing around each new room is recommended, not only to give you a lay of the land but to spot enemies that might be hidden in a corner, awaiting your character’s approach. Equally, in more open areas, you can see the route you’ll be taking through the level, and which enemies are patrolling where. It’s part spectacle, part useful mini-feature.

There were some specific challenges the devs had to overcome using this sort of camera in VR. For example, when transitioning between scenes it’s vastly important that wherever you’re looking as your character exits the screen is where they enter from – if a door leads off to the left, perspective must be switched so that they also enter on the left in the next screen and you don’t lose track of your adventurer. Equally, major changes in scenery have to be done with a crossfade to prevent disorientation. 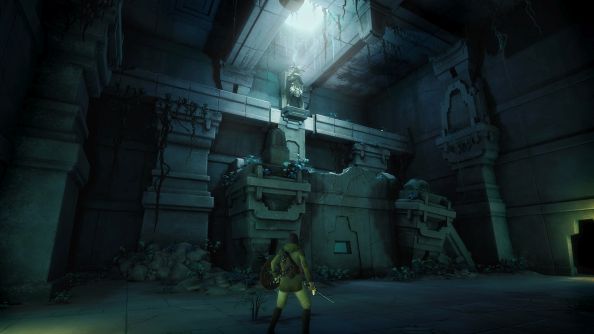 It’s the impossible perspectives that really sell it, though. That mid-game level I was shown is set in a giant tree that houses an entire civilization. Most of the areas here had their camera floating out over the misty abyss, me looking around from a position I could never reach in real life. Another had me buried in the corner of a room, peering out past barrels and struts. It manages to be both that much more realistic for feeling like you’re actually there, without – at least for me – the sickness you might expect from being surrounded by such alien scenarios. I don’t recommend looking down too much, mind.

All of this meshes together to create a unique experience – exactly what the first year of VR is going to rely on to make those hefty purchase prices worth it for early adopters. If you are one of them, Chronos should be at the very top of your to-buy list. You might find that, unlike what the developers told me they had managed, you’re not capable of wearing a headset for four hours at a time to make it through the twelve-ish hour campaign in a few sittings. However, seeing old ideas reconfigured is going to be one of the best things about early VR.