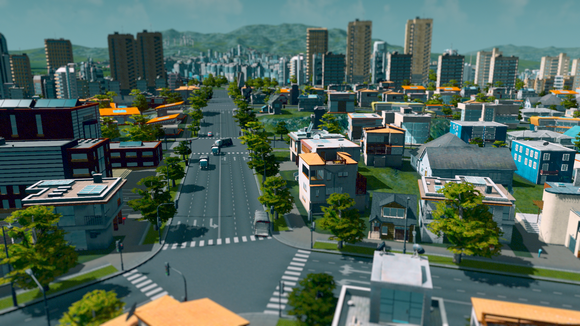 Cities Skylines is what happens when the Finnish developers of Cities in Motion stare in mild disbelief at the crock of shod that was EA’s most recent Sim City and think “hey, we could do better than that, or at the very least we could make a Cities sequel that directly addresses the most notable problems that blighted Sim City, namely the tiny cities and always-online DRM requirement. Yes, we probably reckon we could have a go at that.”

And they did. And it is called Cities Skylines.

To an unsuspecting bystander, Cities Skylines looks identical to EA’s own city simulator, drawing on same the clean graphical aesthetic, those same stylish data maps showing where you can expect ground pollution, how fast the wind is blowing and how property values are changing as you develop your urban sprawl.

Maps come with natural resources waiting to be dredged, tapped, scooped or harnassed: thngs like forests, oil wells and water, and your city will naturally benefit from and become centred around these resources. Connections to other cities are present in the form of motorways, airports, boats and trains, all allowing you to plug your city into the larger world around it. All, of course, in single player and without any requirement for an online connection. 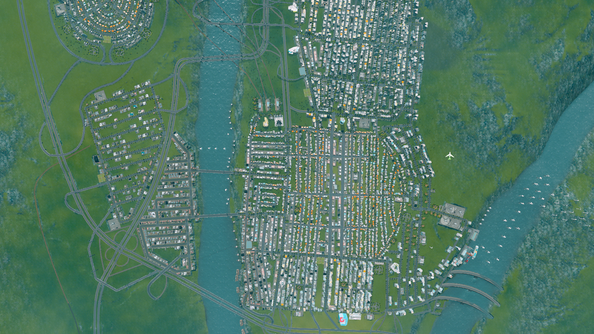 Custom maps can be built, so there’s no need to rely on some limited number of prefabricated locations. You can even choose on which side of the road cars should drive, just in case you’d prefer your city’s vehicles to drive on the correct side of the road rather than the side that idiots from stupid countries drive on.

And those roads can curve and be propped up as bridges or tunnel through mountains and spin around like big tarmac ribbons, all as you’d pretty much expect from a city builder in 2015. Cities Skylines borrows a few districting ideas from Sim City too, allowing you to zone for industry, commerce and residential in the spaces naturally created between roads.

Skylines takes it even further however, by letting you paint zones on the map by hand like a big zoning goddess. Individual, building-sized cells can be designated for a certain use, granting you fine grain control over exactly how your town looks and operates. All the usual tricks of city building apply here: keep your dirty industry away from your residential homes, drop your commercial areas near enough to shoppers. 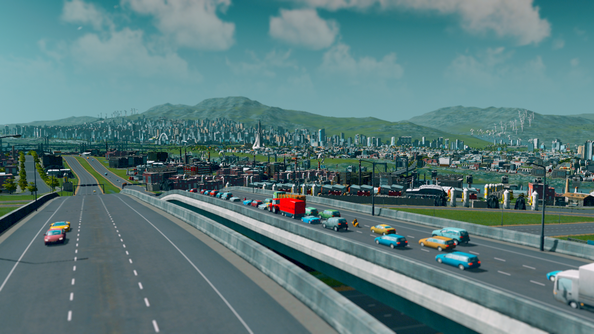 There’s an additional kind of zone in Cities Skylines too, which lets you designate office space that’s distinct from the usual pollution of industry. Offices require a highly educated population, as people who work in offices are well clever, yeah?

From there, the differences between this game and EA’s much maligned city builder become more considerable. You can manually draw the boundaries of your city’s boroughs, and then enact laws that are local to these districts. For example you can lower business taxation in your office district to encourage development, or restrict the construction of high-rise in your posho residential area to keep the rich folks appeased.

In effect you feel more like a mayor, decreeing how money sloshes around your kingdom. As a side-effect you end up with a city that looks and feels more like an actual city in the real world, one made up of a bunch of different mashed together zones with distinct personalities.

And those cities will be huge things too. Sim City was derided for its teensy plots of land into which you had to cram your cityscapes, but Cities Skylines provides vast swathes of the world for you play with. Not only does that free you up to really play around with the game’s districting features, but it makes for prettier screenshots too.

Cities Skylines will be released in 2015.