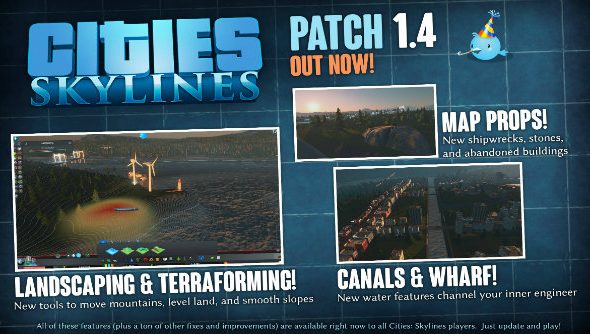 New tools are coming to let you flatten mountains, smooth out slopes and alter Cities Skylines’ topography however you see fit.

Get your planning on in our list of PC’s best strategy games.

As well as the topography tweaking, now you can also place flood walls wherever you want to keep that pesky liquid out of your cities, off your roads and in a body of water where it belongs. You can use the new systems to create your own canals and wharfs if you want.

This being a patch, obviously it comes with a bunch of bug fixes and other boring stuff, too.

Some of these fixes are in response to fan feedback, much like the following: “We have gotten a lot of requests about the road elevation being too steep,” writes the official post. “Therefore the roads, paths, tunnels and tracks now have a new button in the Option panel where you can select snapping and straight or curve type.

“The button has three states and can be used to cycle through three preset heights for the elevation step when using page up and page down. This will give a little bit more precision to laying those roads. Placing of the dams should also get slightly easier with the terrain topography visible in the build view.”

The patch also adds improved error handling for you modders out there, which should make it easier for players to find broken mods.

There are more updates planned throughout spring.

Have a look at the full 1.4 patch notes here:

Can you run it? Check your PC against the Cities: Skylines system requirements.