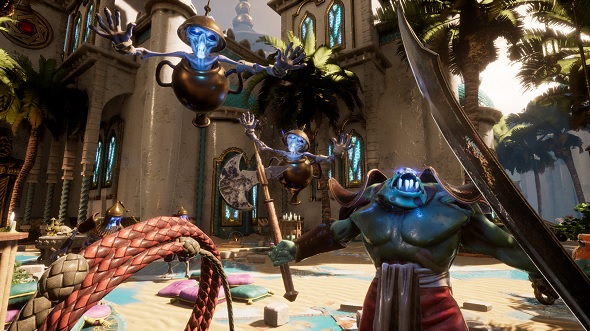 City of Brass, the first person roguelike set in an undead Arabian Nights, has left Steam’s Early Access, with version 1.0 launching Friday, May 4.

Here’s our list of the best first-person shooters for PC.

It’s a fast-paced game that has you bouncing from boss battle to boss battle, using your Indiana Jones-style bullwhip as a multi-function weapon and traversal tool. The way the whip feels, and how genuinely useful it is, makes one wonder why the item has appeared in so few games. But you’ll also have a selection of swords and throwable bombs at your disposal as well. It’ll be your whip that you rely on most, though, and it can be embued with different effects like fire and ice.

That’s good news, because City of Brass throws quite a few menacing enemies at you at once, and you’ll have to move around constantly to stay safe – since this is a roguelike, when you die that’s the end of the run and you’ll have to start again from the beginning. Now that it’s out of Early Access, there’s a final boss battle to contend with.

The game is sharp-looking, which makes sense considering its developers’ experience with the first two Bioshock titles. It takes a kind of undead spin on Disney’s Aladdin, with the titular city full of exaggerated archways and bright colors.