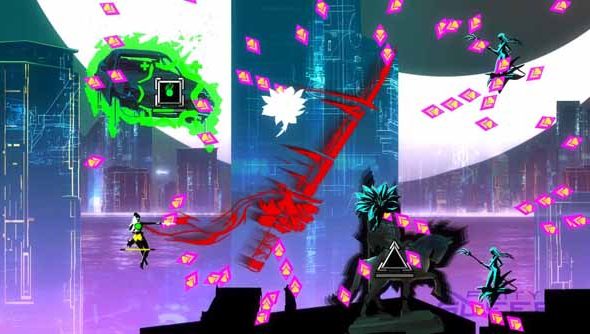 Before Guitar Hero, Harmonix made music game curios that made onlookers go “Huh!”, but sucked their players into a rhythmic trance. Now they’re doing the same again. A City Sleeps is a beat-driven, bullet-hell shooter about a dreaming metropolis.

Poe is the last of the ‘silkworms’ – warriors who can enter the heads of sleeping hosts and wrestle their demons for them. That involves floating about a silhouette cityscape, offing neon shapes to a hip-hop soundtrack.

“When the residents of SanLo City fall into a deep slumber, only Poe can rescue them from their never-ending nightmare,” say Harmonix. “It will take all of her skill to cleanse their dreams of spirits, and – flanked by her stable of powerful familiars – uncover the city’s dark secrets.”

The game is simple: fire projectiles at nightmare creatures and dodge the missiles they throw back. It’s all a bit Ikaruga.

But there are a couple of nice twists. Enemy spawning, movement and bullet patterns will be governed by the soundtrack. And when Poe nears an enemy, she’ll automatically swap to her sword. The risk is greater at close range – but melee attacks build up a special meter, which can be cashed in for a devastating, screen-clearing blast.

What’s more, those powerful familiars are half the game. Poe can summon a trio of spirits – one to administer health, another to shoot at enemies, and a third to anchor an energy rope tied to Poe, that destroys anything caught in its path.

The familiars can only be deployed at nodes dotted across the level, and each node alters the effects in some way. Picking a place to plant familiars, then, becomes a question of strategy.

A City Sleeps will be out on Steam from October 16. Is it your sort of thing? Or has Geometry Wars 3 got you sorted for twin-stick madness?