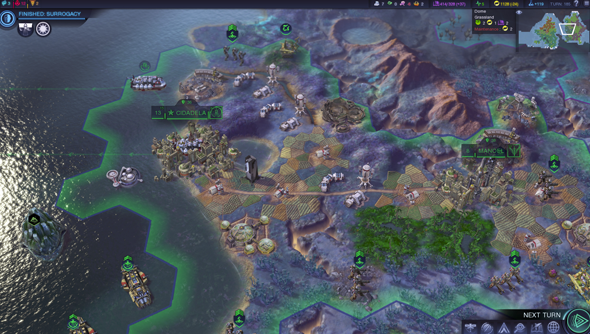 Civilization: Beyond Earth’s fall update makes an astronomical number of changes. There are balances across buildings, diplomacy, aliens, covert ops, and many other areas of the game. Most units in the game have had their values altered, in many cases making them more dangerous.

There’s even been a stack of bug fixes.

One of the changes sees the amount of Affinity rewarded from quests ramping up in amount the longer you play. So it will start small but by turn 100 the rewards will be significantly larger.

You can now also take one more turn after the game has completed. That way if you’re beaten just before your final assault you can see what would have happened if you’d been able to go through with it.

Another new feature is that Beyond Earth now fully supports touch and pen devices. There’s something about ordering a nuclear assault with the taop of a pen that really puts those ‘Pen vs the sword’ scholars in their place.

The bulk of the changes are balances which would be dull to sum up but will each individually affect how you play so you can read the full notes on the next page.

• Trade Depots can no longer be purchased with Energy.

• Establish Network now has 0 difficulty and produces 0 intrigue. This prevents players from exploiting it to increase intrigue.

• Affinity rewarded as a quest reward now ramps up slowly over the first 100 turns (on standard). This ramp will vary with game speed.

• All players now get affinity quests within 1 turn of each other. If it’s not possible for all players to receive a quest at the same time, the game waits until this is possible, then immediately gives all players a new affinity quest.

• Explorers now have 6 combat strength (was 3).

• Sea units now follow the same rules for ranged combat defense as all other units: they use the highest of their combat values (ranged combat or melee combat) when calculating defense.

• Combat Rover unit can no longer fortify, and no longer receives defense bonuses from the terrain it is on.

• Raising the secondary level requirement for the hybrid upgrades of affinity units:

• Changes to the combat strength of affinity units, to make non-upgraded ones more weak in general:

• Once the game is in Extended mode (after the player clicks the One More Turn button) the AI will now only pursue Domination.

• Warmonger calculation now scaled down when cities are taken by Sponsors that are reacting to a war that was declared upon them (that is, when that civ is not the aggressor).

• The menu now displays EQAA modes instead of MSAA modes if in Mantle version and the GPU supports EQAA.

• Added a badge to covert ops button in the action corner which will show up, and a warning to the covert ops panel when a player has any cities with high intrigue.

• All players are notified when anyone completes a victory wonder.

• 2D fallback image now supported for leaders on all video quality settings, not just the lowest.

• Added the ability to mod Quests.

• Fixed an issue where Max turns was getting set on “Reload”, causing achievements to not fire.

• Fixed bug where victory achievements would only unlock for the first player on a team.

• Fixed empty trade requests that could occur during the AI turn.

• Fixed multiple issues with screen resolution on specific displays (like the 144Hz full-screen issue), and a Mantle issue causing the game to not display on the correct screen.

• Fixed some specific issues with resources not appearing properly in the player stockpile.

• Many additional bugs and crashes addressed based on community feedback. Thank you!