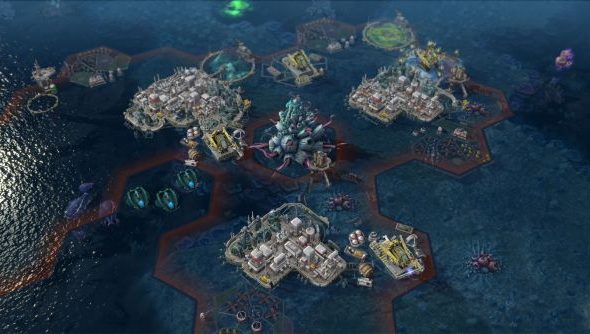 First of all: a confession. I wasn’t that impressed with the original Civilization: Beyond Earth. This sort of sequel/extension to Civilization’s endgame just didn’t sit right with me. It wasn’t either mad enough, or relatable enough. But I think there’s a core somewhere in the game that needs uncovering: something that can combine the thrill of colonisation and terraforming, with Civ’s relentless technological progression.

From what I’ve seen of Rising Tide, this new expansion, Firaxis have some smart ideas.

The theme is water: with factions and units that can exploit ocean tiles. There’s a sort of Brits in Space faction that can create ocean cities from the moment they land, farming the sea for space-trout, and sailing their cities around the coasts at will. It’s a handier ability than you would initially credit it for: ocean tiles can be absurdly productive with the right upgrades (solar collectors ftw). There are some new naval units, and related tech, alongside tweaks to some internal systems. 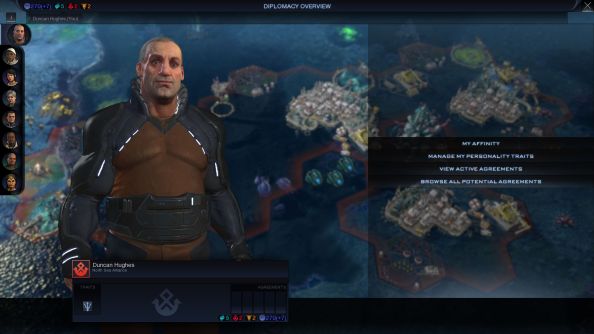 But what I found really interesting was a new approach that Firaxis are taking with diplomacy. It’s a beautiful piece of game design. Here’s how it works.

Diplomacy is now considered a currency: Diplomatic Capital. After earning small lumps as you begin to grow your faction, you can then spend it on buying and selling deals with your neighbours. You can effectively rent a tech from a separate faction. You can effectively rent out a technology to one faction, then spend that diplomatic capital on a deal with another. The capital earned can then be spent on RPG like improvements to your own faction, or on carving our alliances or more detailed treaties. The other factions won’t immediately accept your deal: whether it can be even offered depends on your actions previously, and whether they respect or fear your mighty empire.

It’s a fascinating way of abstracting the traditional black box of opponent AI. It makes sense: diplomacy is rooted in a series of trades – why not turn technology shares and alliances into a straight currency transaction? It’s the kind of semi-boardgame design that makes Civ games work, and I’d love to see it transferred to other games. 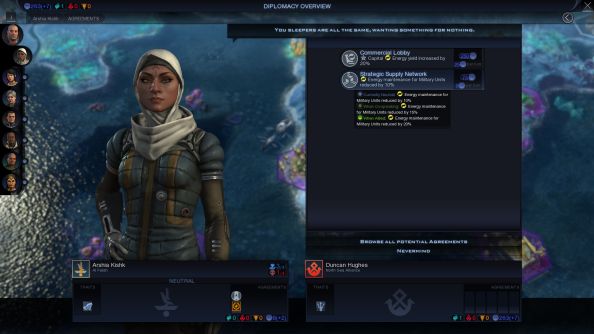 There is one, whopping space elephant in the room. Beyond Earth wasn’t well received. We gave it 6/10 in our Civilization: Beyond Earth review (that’s on the lower end of its Metacritic score), while Steam reviews are mixed. Speaking to Firaxis, they’re aware of the problem. Speaking to Will Miller, the game’s lead designer, over Skype, he says that the team are listening to the feedback. “To us, Beyond Earth is a Civ title, and we take it as seriously as any of our other titles. We wouldn’t be working on it if we didn’t love it to death, and we’re determined that it will live up to fan expectations.”

One of the specific things we, and many players fixated on was the games sterility: a perceived lack of personality. That’s something Will wants to specifically address. “The idea of Civ in the future, or Civ on a new planet has so much potential that there’s still way more to explore if we have a chance. We want the world to feel more bizarre, more strange, more mysterious.”

Rising Tide isn’t quite a reboot, but it’s close. Firaxis think of it as the definitive version of Beyond Earth. And, even if it didn’t work first time, Civ in space is a game I’m desperate to play. Rising Tide brings that dream a little closer.