The answer might disappoint players who have spent years revisiting Planet via backwards-compatibility fixes and the Good Old Games edition of Alpha Centauri. There’s a lot more than licensing issues dividing Civilization: Beyond Earth from Firaxis’ first trip to the stars. The truth is that Alpha Centauri is a work of dystopian sci-fi, while Beyond Earth is a continuation of the fundamentally optimistic Civilization series.

“The word we use is ‘aspirational,’” said McDonough. “It’s very important to us that Civ always be that way. It’s something that can be a little shocking when you play Alpha Centauri. The game requires you to be evil to succeed. We were very careful with this game never to do that.”

With that statement, McDonough and Firaxis have made a clear departure from Alpha Centauri, and it doesn’t stop there. Where Alpha Centauri was the saga of several ideologies’ struggle for dominance, Beyond Earth is less deterministic. There is no one faction leader who will always be tugging in the direction of war, or science, or expansion. Rather, each faction has chooses its “affinity” — its vision for humanity’s ultimate future.

Firaxis told me about the three affinities currently in Beyond Earth, and each reflects a radically different set of objectives. Via some key decision points that occur over the course of a game, each faction will pick between Supremacy, Harmony, and Purity.

Supremacy is all about humanity as master of its environment via technology and intellect. If the environment is unsuitable, you remake the environment. If the body is too fragile, you augment it with machinery. If the mind is weak, you have computers to aid it. Harmony, on the other hand, is rather more self-evident: it’s about adapting and accommodating humanity’s new environment finds itself without completely remaking the planet to suit human interests.

Purity is the one that intrigues me the most, because it’s actually a little less creepy than its loaded descriptor implies. It’s the belief that humanity should actually, you know, remain human. Not evolve into some kind of new form of sentient life, and not become a race of cyborg superhumans. Rather, Purity factions want to protect homo sapiens and make the new planet more like the old one.

Of course, this set of beliefs also makes them a bit more turtle-like: their habitats are fortresses against danger, and they’re not great at coexistence with the elements. Does that make them wrong? It kind of depends on your own philosophical bent, and that’s very much in line with the morality of Civilization: Beyond Earth.

“There’s no dark. It’s really just — The way the affinities are designed, we never characterize one as good or bad. Or right or wrong,” McDonagh said. “They are just different ways to handle the same question. How does humanity survive after they’ve lost their home and have to find a new one on a world that was never meant for them to live on?” 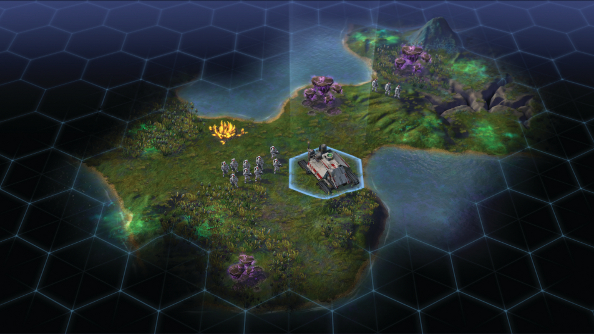 Each faction leader is free to pick from any of the affinities, regardless of whatever their particular strengths are. In this, they are more like traditional Civilization leaders, where they have certain advantages that are adaptable to a variety of different victory paths. These choices, of course, will drive conflict. But it’s not like Alpha Centauri, where Sister Miriam’s religious zealots will almost inevitably run afoul of Provost Zakharov’s nation of scientists.

“We recognize the value in darker and more antagonistic approaches,” said gameplay designer Anton Strenger. “But we took it out of the civs themselves, and we put it into the planet. So when you land on this planet, the planet is very hostile. Your first work in the game is taming that world.”

As an example, Strenger pointed to the Pan Asian Cooperative, and led by a woman named Dao Ming.

“She’s very much this hands-in-the-dirt engineer type that really focuses on production and efficiency,” Strenger said. “So each of the leaders will have their own playstyles and gameplay bonuses. But they also play differently every time. Compared to Alpha Centauri especially, we’re taking less of a strong stance on their play style. …Dao Ming in one game might go for Purification, but in another game, she might go in a Harmony direction. And she’ll play like a totally different civilization.”

Another element of customization comes in the pregame stage, where you get to decide your loadout. This is what your faction decided to bring with it aboard its own personal Ark. This will provide some additional buffs to what your faction will do over the course of the game.

That theme of choice and variability runs deep in Beyond Earth. The way Firaxis describe it, you can imagine each new game of Beyond Earth as being the story of yet another ship in the colonization armada that left Earth. You might land on a craggy, inhospitable volcanic world or a water planet. You might be fighting to survive in a lush ecosystem, an arid landscape, or maybe fighting to keep from being overwhelmed by fungus. Perhaps even more so than in Alpha Centauri, the planet is your first and most persistent opponent in Beyond Earth. 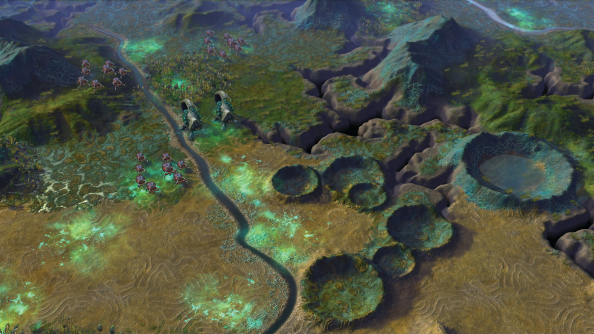 Those challenges will drive different choices about technology, and not just in the “order of operations” sense that’s familiar from Civ’s tech tree. Strenger said, “The image I have in my head for the way technology works is like spokes coming off a wheel. …Players will be able to go off in one direction and unlock buildings and units, but without shooting themselves in the foot. It ends up being a much more modular design. And we have interesting things sprinkled throughout the tree, so much so that you’ll want to experience all the technology. But by the end of the playthrough, you’re only going to get 60-70 percent of the tech.”

All of this means that Beyond Earth will likely be a very different game from both the Civilization V design that undergirds it, and Firaxis’ last sci-fi 4X, Alpha Centauri. It’s not a game that trades in absolutes, nor in pessimism. War will be a part of the game, but it no longer seems like part of an inevitable slide into mutual extermination.

“You can’t all be right at the same time,” McDonagh explained. “We don’t say one affinity is right and one is wrong, but you have competing visions for humanity. So it’s not like you have to take strengths and weaknesses. It’s just differences. A different web of priorities and values. So every time you play the game, you feel like you are leading humanity to a bright future.”

And here is where the Alpha Centauri fan in me ends up feeling a bit let-down. Years ago, I tried to explain why Alpha Centauri it was far more than Civilization II in space:

What I really found haunting about the game was that it was fundamentally subverting your experience. You approached it like a Civilization game, researching techs to unlock new units and make your faction wealthier, smarter, more productive, and all the other things we assume to be goods. In Civ, that may hold true. But not in Alpha Centauri. 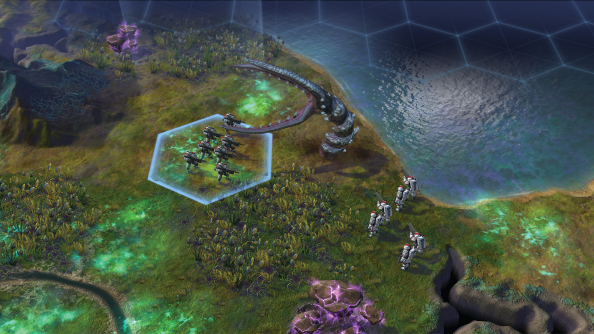 Somewhere along the line it dawns on you that while you’re making progress and winning the game, the society you are building is a nightmare. Dissidents are nerve-stapled. Science has broken all of its ethical boundaries. The bodies of the dead are a resource. Minds are routinely invaded and fused to machines. Your character, the faction leader, never dies and must go on existing for all time.

And if you win, the chances are that you will ultimately lose as Planet rallies to eliminate the human plague. If you get the correct victory (transcendence), you complete the process that has been happening since Turn 1: humanity ceases to be human.

This was the story of Alpha Centauri as told by mission logs, technology flavor text, and cinematics. It was also a story largely conceived by one person: the great Brian Reynolds, who did the vast majority of design and writing on Alpha Centauri. It was a radical break from Civilization and its rather more triumphant overtones. (NB: my podcast, Three Moves Ahead, did a great show with Brian Reynolds and Soren Johnson on the making of Alpha Centauri, and it’s great primer for understanding what made Alpha Centauri so different.)

It’s also why Alpha Centauri is the Firaxis strategy game that has stayed with me the most. It’s game that seems to get more relevant here in the early 21st century, as droughts last longer, as cities flood, and as the United States attempts to turn the world into its own techno-panopticon.

Beyond Earth may end up being a great game, but it’s hard for me to escape the feeling that Firaxis are consciously rejecting what made Alpha Centauri the most thought-provoking and relevant game they ever created. It’s nice to feel like you’re leading humanity into a bright future. But Alpha Centauri asked if that’s where we were really headed, and whether all our attempts to get there weren’t really dragging us closer to the abyss.

Sometimes there are wrong answers. Alpha Centauri understood this. I wonder if Beyond Earth will.