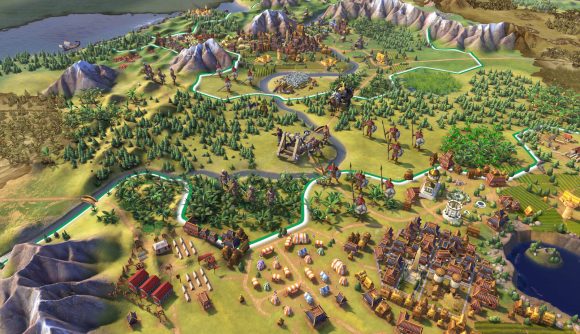 One of the most fascinating things about covering videogames for a living is that you get to see what communities get up to when there’s nothing else going on. Now that 4X game Civilization VI’s New Frontier season pass has come to an end, players can’t expect to get the same regular cadence of monthly updates to keep them entertained as they’d been getting before. So, what are they going to do in the meantime? Make maps, apparently.

It all started with Reddit user Le_Charlie, who made a map that locates all of the city names available for the Arabian civilisation in their real-world location, using a simple world map. Whenever you play a Civ 6 civ (or civ in any civilization game, for that matter), the names of new cities that you found will be generated from a set list from that civ's history.

This isn’t the first time Le_Charlie has done this, and previous maps of theirs include one for the American cities in Civ 6, and even a world map that locates all of the capitals in the strategy game.

The most recent map, though, has inspired others on the Civ subreddit to do the same. There’s been some light-hearted trolling, of course, such as this map of all of the Venetian cities in Civ 6, and this thoroughly researched map detailing every Slovakian city present in the game:

I located all of the Slovakian cities in Civ VI for fun. (Inspired by u/Le_Charlie) from civ

But there have been plenty of serious responses as well. Redditor NucleusBrain created one for the German cities in Civ 6, as well as one for Roman cities. User Yehterf created a map for the Maori, while Louisly has gone that extra mile and created several maps showing French cities across all Civilization games. Show off.

The recent New Frontier season culminated in the big April balance patch, which shook up just over half of all civs in the game and even introduced some new military units.

Recently, Firaxis released a big ‘thank you’ video to the community, but the studio hasn’t yet officially confirmed what it’s working on next. Will it be Civilization 7? Or more Civ 6 DLC? Who knows.