To help you make the most of what Firaxis is calling the biggest expansion Civ has ever had, we’re presenting our findings in a series of detailed yet digestible guides. We’ll give an overview of each civ and its unique traits, followed by a practical guide to making the most of them. And for the first time ever in a Civilization game, we can finally lead the Great White North, America’s Hat, and the birthplace of Tim Hortons to global domination. Here’s how to succeed as Canada. For other new approaches to the top, see our guides on the Ottomans, Incas, Maori, Sweden, and Hungary.

In Gathering Storm, the canucks are led by Wilfrid Laurier, the first Canadian Prime Minister to grow up speaking French and an instrumental figure in fostering unity between English-speaking and French-speaking Canadians.

Leader: Wilfrid Laurier – The Last, Best West. You can build farms on Tundra tiles, and even Tundra Hills once Engineering is researched. Purchasing any tile with either Snow or Tundra is 50% cheaper, and those terrain types give you double the amount of extractable resources like Iron, Oil, and Uranium.

Unique Ability: Four Faces of Peace. You can never declare a Surprise War, nor can you declare war on city-states. But in exchange, no one else can declare a Surprise War on you, every 100 Tourism you generate grants you 1 Diplomatic Favor, and you gain double the usual amount of Diplomatic Favors for participating in an emergency or a scored competition like the World’s Fair.

Unique Unit: Mountie. This Light Cavalry unit has a very low maintenance cost and the ability to found a National Park. Doing so isn’t necessarily benevolent, though, as they gain +5 Combat Strength within five tiles of a National Park, boosted to +10 if that National Park is owned by Canada.

Unique Improvement: Hockey Rink. Arguably Canada’s greatest contribution to the world, Hockey Rinks can be built on any Tundra or Snow tile and provide +1 Amenity to the host city, +2 Appeal to their tile and all surrounding tiles, +1 Culture for each adjacent Tundra and Snow tile, +2 Food and +2 Production when Professional Sports is researched, +4 Culture if next to a stadium, and free curly fries if the Detroit Red Wings somehow manage to string together three goals in a single game.

Agenda: AI Wilfrid wants to participate in every global emergency that comes up, and will appreciate you if you do the same. 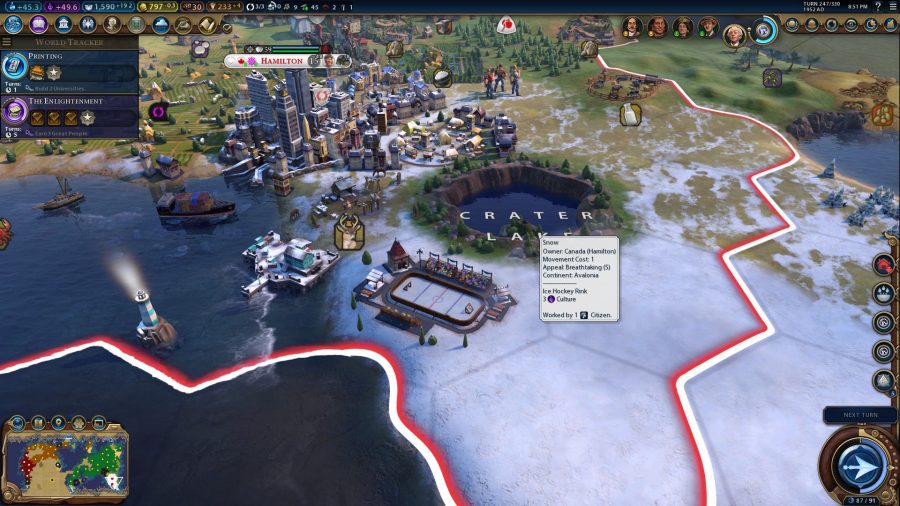 Basically, you’re going to take over the world using hockey.

Cultural victory isn’t the only option available to Canada. It’s also very well-suited to Diplomatic or even, if you play your cards right, Domination. But Hockey Rinks are so ridiculously good, especially in the late game. You should not rest until every city has a team. If you need to, conquer other cities in cold places to expand the league. Even other subpolar-friendly civs like Russia can’t turn Snow tiles, normally some of the worst tiles to settle on, into such production powerhouses. For Canada, they’re prime real estate. Sprinkle the Arctic with zambonis and laugh as your teeming metropolises of rink-centric, high value Neighborhood districts – built on top of the very ice – zoom to the top of the globe’s most attractive vacation destinations.

Don’t forget to make the most of Canada’s double extraction rate for strategic resources in cold climes. Since you’ll usually end up having more than enough to power your cities and upgrade your units, it can be smart to trade any extras away for Diplomatic Favors or, if you need it, cold, hard cash.

Early on, you’re going to want to plop down your cities in such a way as to claim as many of your hemisphere’s Snow and Tundra tiles as possible. Not that there’s a ton of competition for that. This will lead to you generally having a very wide expanse of land all situated around the same latitude, which can be difficult to defend, so don’t skimp on walls and garrison units. Your early growth will be slower than most of your rivals’, so try to make the best of things and pave the way for future glory by building a strong culture. Focus on techs and policies that will help you get Great Artists and Great Writers, and rush for wonders that boost Culture. Make sure to always maintain a respectable military, both for defense and to make the most of any chances to intervene in an emergency. 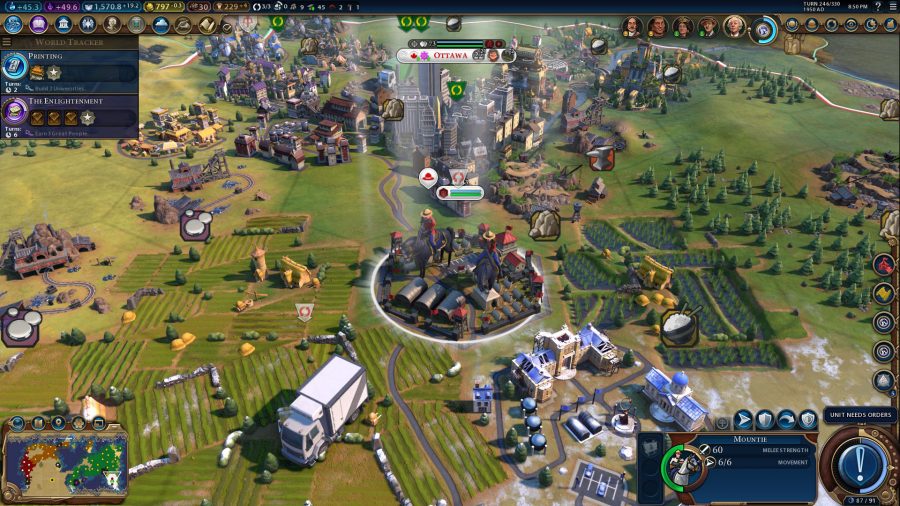 Once you grab Colonialism, it’s game on. Nothing matters now but Hockey. You eat, sleep, and breathe Hockey. You have no other god before Hockey (although having picked up the Dance of the Aurora Pantheon bonus along the way certainly won’t hurt). When you get Professional Sports, you don’t even care about Farms or Mines anymore. If they get in the way of Hockey, your other industries must be destroyed. There is no Canada. There is no Wilfrid Laurier. There is no you, sitting at your PC playing this game. There. Is. Only. Hockey.

Or, you know, you can focus on bending the World Congress to your whim and winning diplomatically. If you really want to play against type, you can even go for a Domination Victory. It’s a bit tricky, because you’ll want to time your wars of expansion with a Golden Age and choose the “To War!” dedication. This circumvents your normal inability to declare Surprise Wars by giving you a Casus Belli that allows hostilities to commence only one turn after you Denounce a target. 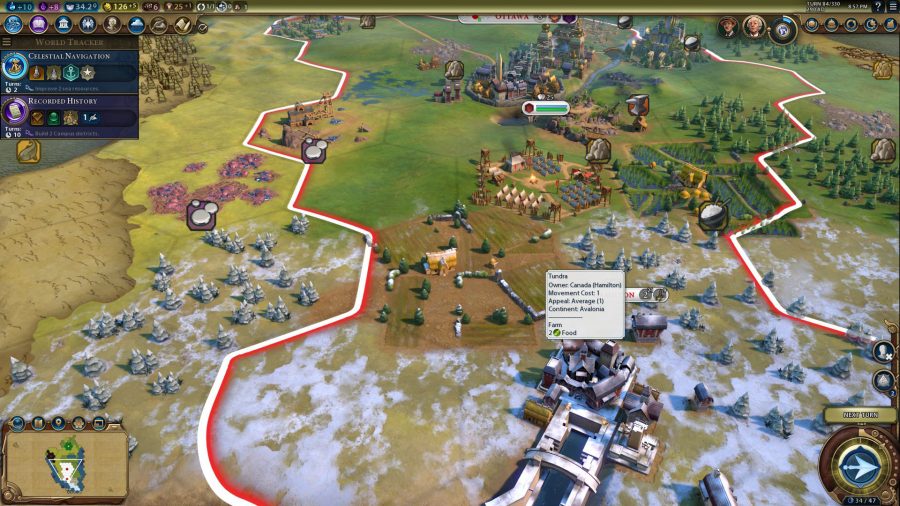 With Mounties at your command, you’ll be uniquely suited to conquering other eco-conscious culture civs that foolishly set aside land for National Parks, using their own natural splendour against them. This is also useful for stopping another civ that might beat you to a Culture Victory, even if you don’t want to paint the whole map in Hockey.

Read more: Civilization VI: Gathering Storm is great only for its civs

Canada can be a great civ to have a relaxed, relatively conflict-free campaign with on a cold winter night when you just want to curl up with some 4X and a cup of hot cocoa. The opportunity for a shot of excitement is always there with their incentives to get involved in emergencies, but they won’t often be in too much danger. Other civs not going for a Domination Victory won’t see the point in conquering all that frozen wasteland unless you really tick them off. But you’ll show them all. They’ll be buying autographed jerseys of even your second- and third-string players at outrageous prices from a league-partnered sportswear manufacturer before they can say “Eh?”. Dread it. Run from it. Hockey Season still arrives.