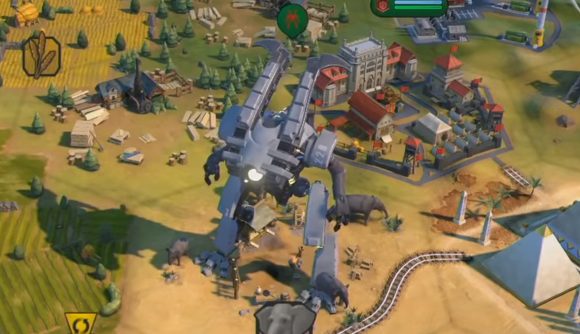 Giant Death Robots are coming back in Civilization VI: Gathering Storm. Yes, the meme turned futuristic uber-unit is finally returning from Civ 5, and it’s got all the destructive power you could hope for – as well as the ability to jump over mountains. Firaxis ran down the details in a developer stream last month.

Mechanically, the GDR is an Information Era Super Unit that costs 1,500 Production and a piece of Uranium, and will require a further 15 Gold and 3 Uranium to keep on the field. It’s got impressive enough stats to start, but it will additionally gain new upgrades as you progress through the furthest reaches of the tech tree.

Those upgrades include things like anti-air defenses, movement and defensive bonuses, and a ‘particle cannon’ – a siege cannon for taking down cities. Its base movement rating is five, and it’s got a lot of extra options, like the ability to jump over mountains or wade through shallow water. Basically, it’s the ultimate expression of destruction if you’re looking for a late-game domination victory.

The GDR isn’t invincible, of course, and a well-coordinated attack can take one down, as can the unit’s own hunger for resources.

Strategic thinking: Get into the best strategy games on PC

You can see a lot more of our Giant Death Robot friend in action through the video below. While the stream’s largely focused on the Inca, you can skip to the mech action at 46:10.

The Civilization 6: Gathering Storm release date is set for February 14, just in time to pull you away from the special people in your life for hours upon hours of historical strategy. For more robot powered destruction, see our guide to the best robot games.