The Inca will make their return to Civilization with February’s Gathering Storm expansion. Led once again by Pachacuti, the Inca can make use of mountains like no-one else.

Their unique ability is Mit’a, which enables citizens to work mountain tiles. Mountains provide +2 production, and gain +1 food for each adjacent Terrace Farm. That’s the Incas’ unique improvement – it can only be placed on hills, and besides adding food to adjacent mountains, it also provides +1 food in itself, +2 production for adjacent aqueducts, and fresh water to the local city.

Pachacuti’s leader ability is Qhapaq Ñan. This causes domestic trade routes to grant +1 food for every mountain in their origin city, and is also an improvement that builders can place on mountains. Essentially an early version of the new mountain tunnel, a Qhapaq Ñan is a movement portal that allows units to enter it, and exit from another portal at a cost of two movement points.

Finally, the Incas’ unique unit is the Warak’aq. A medieval era recon unit, it can attack twice if it hasn’t spent all its movement.

The Inca are dependent on mountains for almost all of their unique advantages. As such, we can safely assume their start bias will set them up with a few mountains from the get-go, and smart use of terrace farms and internal trade routes should help you grow quickly. 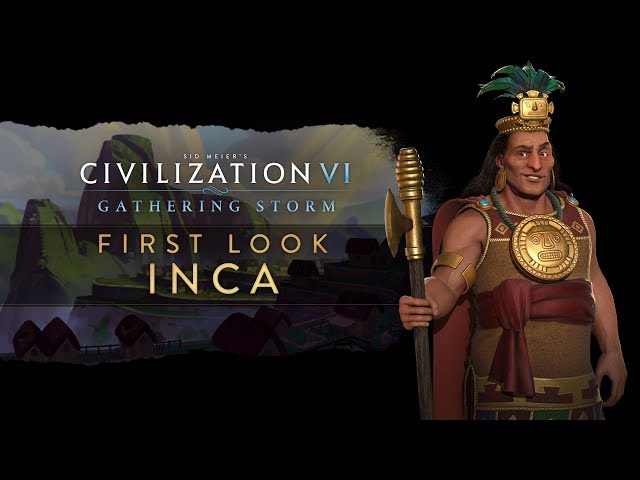 Provided you have plenty more mountains near which to settle, there’s a lot of potential for a flourishing tall empire with booming food and production. However, if you don’t get the mountains to sustain such expansion – which is unlikely on, say, an archipelago map – the potential of the Incas’ uniques seems pretty firmly capped to me.

The Civ 6: Gathering Storm release date is February 14, 2019. Happy Valentine’s Day! As ever, we’ll bring you every new civ as it’s announced. We’re four down, four to go at this point, with an as-yet unknown new leader also confirmed.