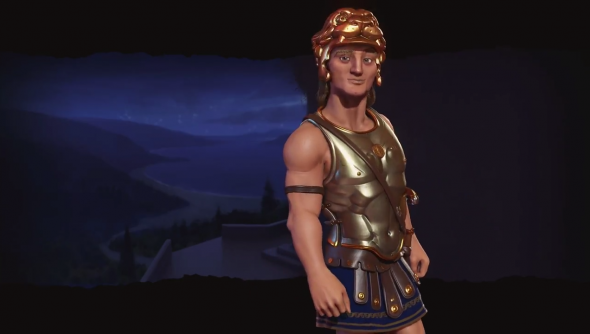 The next Civ 6 leader has been announced by Firaxis Games. Alexander the Great and his countrymen the Macedonians will be coming to the game via the Spring 2017 update. Persia’s Cyrus the Great was announced as part of the upcoming update recently, and Alexander the Great, along with his new civilization, will be joining him.

Ready for more Civ 6? Here’s what we want from Civilization 6’s DLC.

Alexander the Great/Macedonian Unique Abilities: To the World’s End and Hellenistic Fusion

Alexander the Great and Macedonia are best played as a rush-type civilization. To the End of the World reduces war weariness penalties which means you can start your military campaigns sooner in the game and have them last longer. To the World’s End doesn’t negate diplomatic penalties for starting wars, but if your objective is to conquer the world, who cares about diplomacy?

Hellenistic Fusion, Alexander’s second unique ability, pairs well with To the End of the World. With it, you’ll gain a bonus for each district in a conquered city. The bonus depends on what type of district is captured, and this ability encourages you to conquer more cities as quickly as possible. With the issue of war weariness minimised by To The World’s End, you can afford to rack your Hellenistic Fusion bonuses up to your heart’s content.

In the Macedonian army, two units are replaced by unique units. The swordsman is replaced by the hypaspist, and heavy cavalry is exchanged for the hetairoi.

The hypaspist serves the same melee combat role as the swordsman, but gets an attack boost when assaulting districts and cities. This unit paired with Hellenistic Fusion will help compensate for the funds you spend on your military by allowing you to sack districts and gain science and culture quickly.

The second Macedonian unique unit, the hetairoi, comes with the ability to be promoted immediately for free. That means you can choose to either grant the hetairoi the Charge ability, which grants a bonus when attacking fortified defenders, or Barding which gives added defense against ranged attacks. Having experienced cavalry as soon as they’re produced gives a great boon to Alexander the Great’s arsenal that can give you the edge over rival civ armies.

The Macedonian Empire maintained specialised academies, the Basilikoi Paides, for the training of royal pages. Young nobles, both domestic and integrated foreigners, attended these schools which gave them an extensive education. The Basilikoi Paides generates science in Civ 6 whenever a non-civilian is trained in the city it’s located in. The Basilikoi Paides also grants combat bonuses to certain unit types, and its generation of science when a military unit is created is another way to offset your military costs. Looks like it’ll be built in encampment districts.

Alexander the Great and the Macedonians have some intriguing abilities, and it’ll be interesting to see how their unique traits will play out in the game’s meta.

Are you happy with the addition of Alexander the Great and Macedonia? Which civs would you rather see? Let us know in the comments.