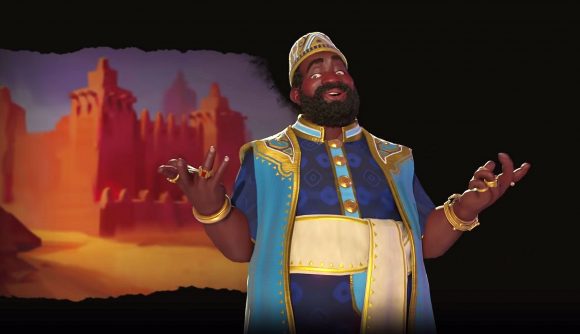 With the holidays behind us, the Civilization VI: Gathering Storm civ reveals are dropping once more. Today Mali is unveiled, led by Mansa Musa – supposedly the “richest person in history” thanks to the abundant gold mines Mali enjoyed during his reign.

Mali’s unique ability is Songs of the Jeli, which grants city centres extra food and faith for adjacent desert and desert hills tiles. Mines will provide less production, but a lot of extra gold – the video shows a mine on a luxury resource producing one cog but a whopping seven coins. Mali can also purchase buildings in their unique commercial hub – the Suguba – with Faith.

The Suguba itself will provide discounts to every Faith and Gold purchase made in the host city, and receives major adjacency bonuses from rivers and Holy Sites.

Mali’s unique unit is Mandekalu Cavalry. It replaces the Knight in the Medieval era, gains gold from kills, and “provides protection to nearby trader units”. This means they can’t be plundered if within four tiles of Mandekalu Cavalry.

Finally, Mansa Musa’s leader ability is Sahel Merchants, which will grant you an extra trade route during a Golden Age, and +1 gold per trade route for each desert tile in the origin city. Given Mali’s clear desert start bias, this is huge.

It should be obvious at this point that Mali under Mansa Musa can get stupidly rich. Their powerful mines, combined with their desert-fuelled trade routes, should see you swimming in cash once you’ve had a chance to build up some infrastructure.

In fact, combined with the Suguba’s purchase discounts and the loss of production from mines, you should probably expect to buy most of your empire rather than build it. These traits add up to a clear nudge from Firaxis to shift your playstyle, and it’s cool to see them experimenting a little more with the Gathering Storm civs.

Read more: everything about Civ 6: Gathering Storm so far

Sid Meier’s Civilization VI: Gathering Storm is out on February 14 this year – just over a month to go now, with three more civs (but four more leaders) still to be revealed.