To help you make the most of what Firaxis is calling the biggest expansion Civ has ever had, we’re presenting our findings in a series of detailed yet digestible guides. We’ll give an overview of each civ and its unique traits, followed by a practical guide to making the most of them. If you like exploring new, untamed lands and plopping down gigantic urban sprawls on top of them, look no further than Phoenicia. For other new approaches to taking over the world, see our guides on the Ottomans, Incas, Maori, Sweden, Hungary, and Canada.

Led by the legendary queen Dido, fabled founder of Rome’s iconic rival city Carthage, Phoenicia has a pretty unparalleled ability to maintain a sprawling empire over land and sea across the far corners of the map.

And just as everyone has heard of Carthage, but no one can tell you what the capital of Ancient Phoenicia was, they’re very flexible in their ability to decide which cities are most important to them.

Leader: Dido – Founder of Carthage. You can move your capital to any city in which you have built the unique Cothon district. You can still only have one Government Plaza district, but the city you build it in gets a 50% Production bonus to building other districts. The Government Plaza itself and any buildings constructed in it also give you an extra Trade Route slot each.

Unique Ability: Mediterranean Colonies. You start with the Eureka for Writing – a nod to the fact that most of our modern Western alphabets are based on the ancient Phoenician script – and all cities on the same continent as the capital will never drop below 100% Loyalty. In addition, your Settlers have +2 movement and can embark on or disembark from the sea at no extra movement cost.

Unique Unit: Bireme. This replacement for the ancient Galley is a naval melee unit with higher combat power, more speed, and the ability to make any Traders within four water tiles immune to plundering.

Unique District: Cothon. Replacing the Harbour, this district grants a 50% bonus to Production of Settlers and naval units, provides greatly increased healing to naval units in its city’s borders, and allows you to relocate your capital to any city where one is present.

Agenda: Sicilian Wars. AI Dido likes to settle along the coasts, and prefers that you keep your smelly settlements inland so she can continue to do so. 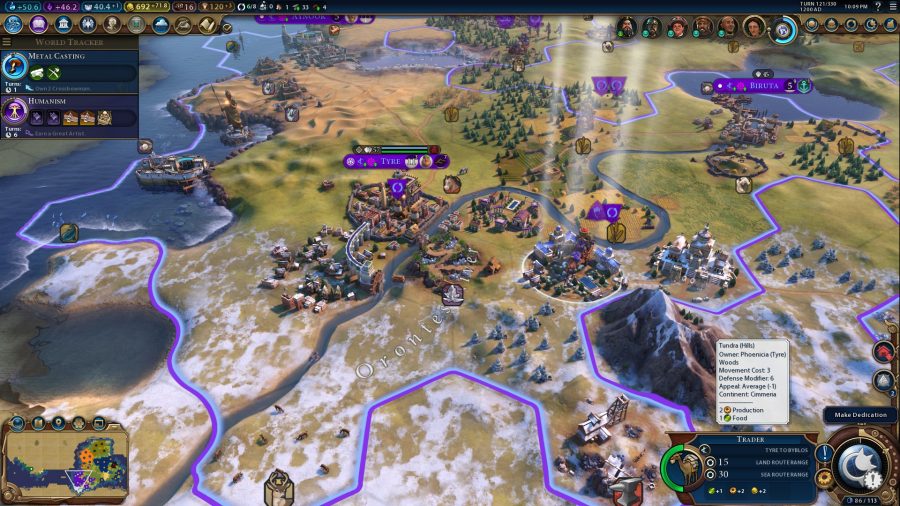 It may take a little while to grasp the possibilities of Phoenicia’s unique bonuses. Why would I want to move my capital other than to play keep-away from some marauding foe about to snatch my most important city for a Domination Victory? Wouldn’t my fate be mostly sealed by then? Is this just the Battlestar Galactica of Civ 6 factions? Then I realized I was being dense. The key is in realising the potential of synergizing Dido’s ability to ensure cities on the same continent as the capital are never disloyal.

By Blade and Bireme

Phoenicia can benefit from early aggression if you happen to settle near another coastal civ. A Bireme or two supported by land units can snatch a poorly defended expansion city fairly easily before it has a chance to build walls, but the timing will be tricky to get right - so stay alert.

While most civs have to worry about Loyalty pressure when they go spitting cities out all over the place, Phoenicia has no such concern. Simply build up your starting continent to the point that Loyalty won’t be much of an issue, pick a new continent, move your capital there, and go crazy.

Smart placement of governors can supercharge this strategy and allow you to expand quickly even across two separate continents at once without having to sweat the possibility of rebellion too much. If you started on continent A, move your capital to Continent B, and make sure all your new settlements on Continent C have a governor in residence. With any luck, you’ll be pretty secure. 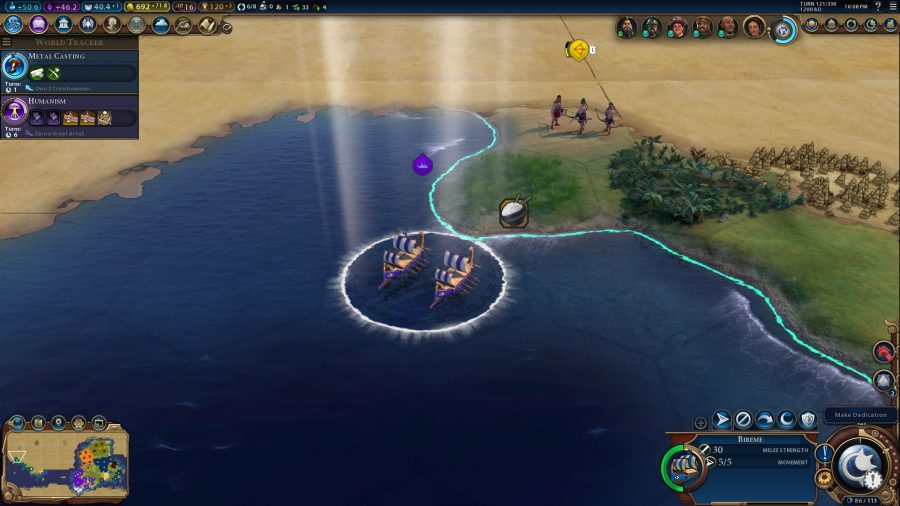 One way to kickstart this process on a map with a lot of ocean is to build a lot of early Cothons and pick up the Naval Tradition civic, which unlocks a policy card that increases your Great Admiral points per turn. The guy you’re trying to snag is Leif Erickson in the Medieval Era, as he allows naval units to cross ocean tiles much earlier than they would otherwise for a very early transoceanic empire. I was able to bring him onto my payroll around 600 AD and circumnavigate the globe centuries earlier than that hack fraud Magellan.

Such strategic supremacy will have you well positioned for a Domination Victory. Though you’ll have to be sure you have an army large enough to defend all the disparate corners of your empire from counter-attack. Policy cards that reduce unit upkeep and a military government are almost essential if you want to go that route, even with the money making potential of Cothons and your bonus Trade Routes.

Science Victory is also an attractive option since you can get Writing just a bit faster than everyone else and start plopping down Campuses. Culture is enticing as well, as your early exploration voyages with Leif and ability to dump a city just about anywhere can be used to claim Natural Wonders left and right. In the late game, each of these will be a fantastic spot for a Natural Park to supercharge your Tourism. If the Space Race is more your thing, you can bid your rivals good luck stopping your rockets when the various components are being built in triplicate at assembly sites thousands of miles away from each other, and your sprawling fleets are ensuring their transcontinental invasions are a nightmare. 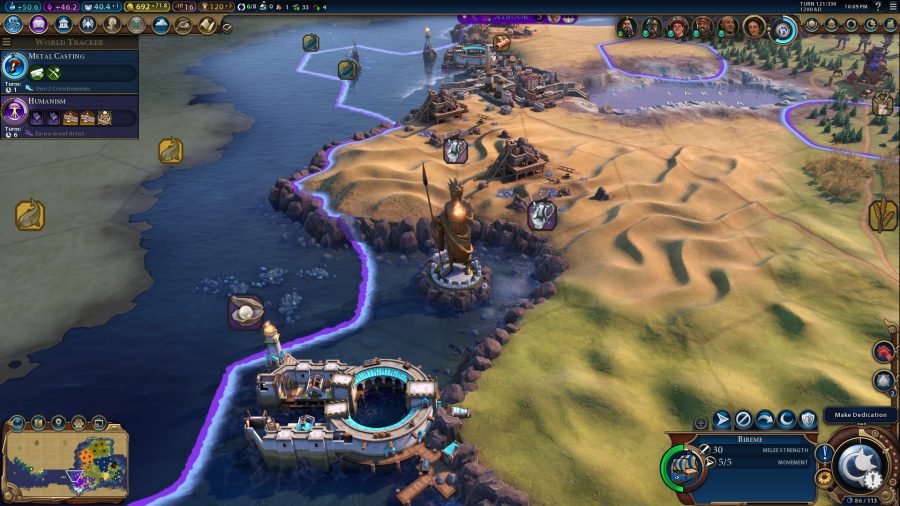 One of your main weak points is going to be land combat as none of your bonuses really give you a hand there. Plus you’ll be dependent on sticking to the coast to be able to build Cothons. This is another good reason to maintain a militaristic government throughout the campaign, as you can make up for any shortcomings with strong policy cards.

Luckily, you shouldn’t ever be lacking for strategic resources to keep your units up-to-date given you’ll be present on multiple continents, and have most of the map explored before most other civs have even figured out how to escape the shallows. Just bear in mind that said upgrades will drain your treasury fast, so you may want to consider slotting in the Professional Army policy to cut those costs in half, or only keeping the units in the areas with the most conflict fully upgraded.

Phoenicia is one of the most victory-agnostic civs in the game. You can make just about anything work with a little initiative and smart expansion planning. They’re one of the strongest naval civs as well, able to out-produce almost anyone on the high seas. So set sail and conquer! But also be careful. With all those coastal cities, Phoenicia is up there with Japan in terms of civs that are extremely vulnerable to late-game climate change. You’ll want to invest in renewable energy early, and maybe even make a point of killing anyone who doesn’t.