The free Civilization 6 October 2020 update is due to launch later this week, and the biggest addition is the new pirates scenario. The devs offered a quick glimpse at the new mode in the debut video for the upcoming patch, but a new video shines a brighter light on what we can expect from the scenario.

The 60-turn multiplayer scenario puts you in control of one of four pirate factions – Dread Pirates, Privateers, Swashbucklers, and Hoarders – each with its own active ability and passive ability. Victory is achieved by having the highest score when the scenario comes to a close.

The Dread Pirates‘ Walk the Plank active will immediately sink a damaged enemy ship, while inspiring your own ship with increased movement and combat strength. The Fightin’ Is What We Do Best passive will give you extra gold every time a unit enters combat. Privateers have the Bring Her Home active, which will capture an enemy for your patron in exchange for gold and infamy. Letter of Marque will reveal all the ports of your patron, and will give you extra gold for pillaging along the trade routes.

Tack Into the Wind gives Swashbucklers double movement for two turns, and their Sailing the Open Seas passive gives bonus infamy for uncovering the map – a perfect combo. Finally, the Hoarders get Chain Shot, which temporarily locks an enemy unit in place. The Mine! Mine! Mine! passive reduces unit maintenance cost, offers bonus points for burying treasure, and gives you interest on your gold reserves.

Those are the four player factions, but England, France, Spain, and the Netherlands will also be sailing the sea as AI opponents. You can, of course, attempt to plunder individual ships along trade routes, but you can also hold out for the treasure fleets that regularly head out from various ports – they’ll be protected by dangerous guard ships, but you’ll get big gold bonuses for taking the fleets down. 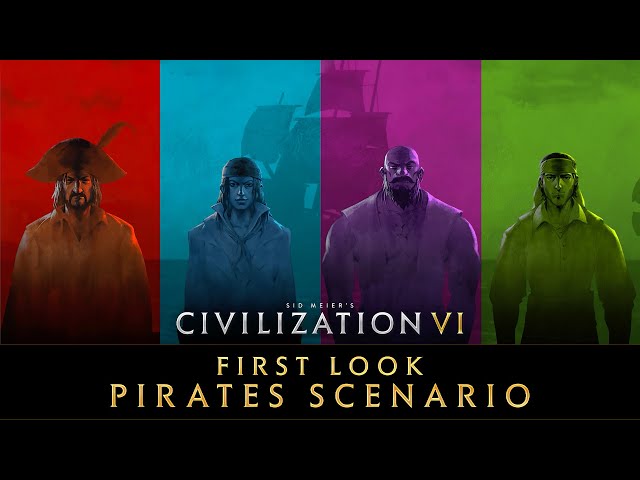 You’ll also find Buccaneers in this scenario, taking the place of barbarians. They work pretty much as you’d expect, but you’ll also find infamous pirates among their ranks, which are more dangerous, but grant you bonus infamy if you take them down.

At port, you can hit the taverns to gather additional crew, pick up maps to buried treasure, and get relics that’ll give you additional passive bonuses.

Civ 6 is already one of the top strategy games out there, but it looks like it’s gunning for the pirate games crown, too. Maybe it’s appropriate to see Sid Meier’s name remain at the top of both genres all these years later.