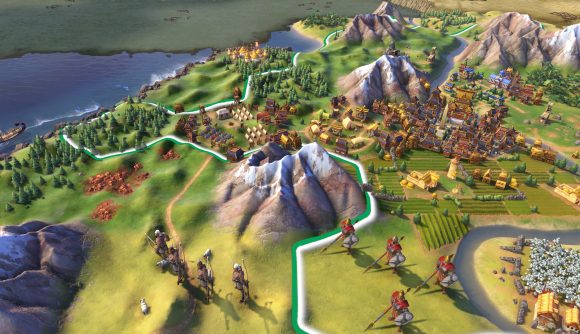 If ‘one more turn’ is good, then hundreds more turns is better, right? Well, if you’re left wishing your Civilization VI games lasted longer, Civ Reimagined 6.9 is the Civ 6 mod for you. It extends the vanilla game’s playtime by expanding on each historical era, and it packs loads of new tech and mechanical tweaks into the 4X game to make sure you can settle in for the long haul each time you fire up a new game.

Civ Reimagined incorporates a few pre-existing mods, including elements of Steel and Thunder and Warfare Expanded – so you’ll need to install those mods in order to run this one. Modder wbwillis has reworked the entire Civ 6 tech tree in order to better incorporate that new units added by KrumStrashni and Kizkiyahu in the Warfare expanded mod series. This mod adds 120 new techs, 50 new buildings, 45 new civics, and 65 new policy cards.

Wbwillis explains that the new policy cards, for example, are designed to make for tougher decisions. Instead of only providing benefits to your nation, each one also includes downsides as well. Civ Reimagined also adds penalties for growth that prevent nations from steamrolling – as you expand, maintenance costs will increase and you’ll run into negative bonuses for moving into new eras.

These you’ll eventually offset with discoveries and new buildings you construct, but it functions as a kind of bottleneck that allows players a window of time to catch up with any civ that’s found itself running well ahead of the pack.

To use Civ Reimagined 6.9, you’ll need to subscribe to it in the Steam Workshop. You’ll also need to check through the list of required mods to make sure you have all of those installed, too. Wbwillis says everything should work fine in multiplayer – as long as you’ve got a friend who’s also interested in a very, very long game of Civ 6.